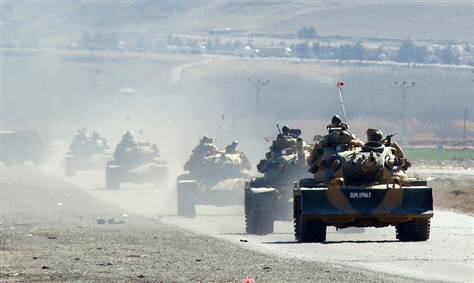 The Turkish army sent reinforcements to an area near the border town of Suruc in Sanliurfa province on Oct. 6, while a convoy of military vehicles towing howitzers headed toward the border town of Reyhanli in Hatay province today, the state-run Anatolia news agency said in two separate reports. Last week, parliament gave the government a one-year mandate to send forces into Syria if necessary. . . .

Foreign Minister Ahmet Davutoglu told state-run television on Oct. 6 that the deaths in the town of Akcakale were caused by a D30 type, 122mm artillery shell used only by the Syrian army.

The subsequent Turkish threat to enter Syria was a “necessary warning to the Syrian administration to prevent a war,” Davutoglu said during an interview with TRT television.

“Ankara is responding to cross-border shelling more as a deterrent,” Ash said. He said the motion passed by parliament gives Turkey the option to defend itself and “is no way a precursor to Turkish full-scale intervention” without sanctions and support from the North Atlantic Treaty Organization and the United Nations.   (photo: Reuters)