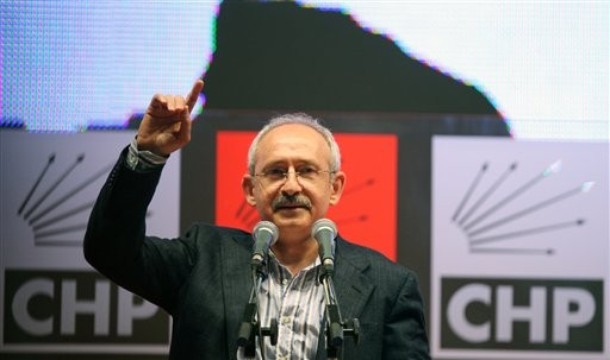 From the AP:  Turkey’s resurgent opposition seems to be gaining traction by articulating fears that [Turkey’s Prime Minister Recep Tayyip] Erdogan is steering NATO’s only Muslim member away from the West, jeopardizing EU membership efforts, and even undermining a long-running battle against separatist Kurds.

The views of the Republican People’s Party – which considers itself a guarantor of secular values and enjoys a power base among Western-leaning urban elites – are increasingly important.

The movement has a popular new leader following the resignation of its chairman over a sex scandal and many have high hopes that he can rejuvenate the party, presenting a viable alternative to Erdogan and anchoring Turkey firmly back in its Western orientation.

Kemal Kilicdaroglu made a name for himself by exposing corruption within Erdogan party’s that led to two senior officials stepping down. …

"We are witnessing a serious crisis of confidence between (Erdogan’s party) and the West … This crisis must end immediately," Kilicdaroglu said in a speech.

A recent opinion poll shows that the Republican People’s Party has made gains since Kilicdaroglu took the party reins, although Erdogan’s Justice and Democracy Party remains more popular.

The survey, conducted by the Konsensus research company for Haberturk newspaper and published Saturday, shows 38.8 percent backing Erdogan’s party against 31.3 percent for Kilicdaroglu’s Republicans – up from the 25 percent support for the party under the previous leadership.  (photo: AP)