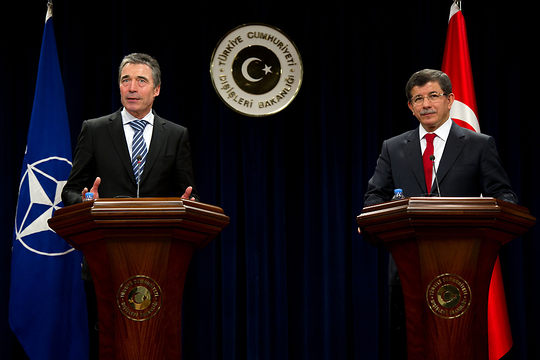 As speculation on whether or not chemical gas was used in a recent attack in Syria — killing more than 1,000 and injuring many more in Damascus — rang alarm bells globally, Ankara, along with a NATO-backed international coalition, has started to ready itself against a possible intervention in Syria.

Turkey, which has already reinforced its defensive measures against any chemical attack along the Syrian border due to the threat of chemical weapons in the war-torn country, has started extra exercises in its southern provinces of Hatay, Kilis, and Şanlıurfa as a measure to contain any chemical attacks from Syria.

An upcoming meeting of senior military officials of the US, Turkey and other Western allies to discuss Syria, debates that 400 tons of arms have been sent into Syria from Turkey to strengthen the hand of the opposition against Syrian regime forces, and a meeting of US President Barack Obama with his top military and national security advisers over Syria all indicate that something is being cooked up behind closed doors for a possible intervention in Syria after more than two years of conflict in the country.

As tension runs high in the politically fragile region due to the chemical gas debate, a senior Turkish military official is scheduled to join his allied counterparts in Jordan to discuss the possible ways to respond to allegations of chemical-weapons use in Syria. Beside US and Western allies, Saudi Arabia and Qatar, two of the staunchest supporters of the Syrian opposition forces fighting against the regime, were also expected to join the meeting.

This was not the first time top military officials have met to discuss the situation in Syria. However, this meeting gained new urgency due to the chemical attack debate, which has dominated headlines of media outlets for days.

Meanwhile, according to a spokesperson for British Prime Minister David Cameron, the US President, who was reluctant to launch a war against Syria, and Cameron have agreed that chemical-weapon use by al-Assad’s forces would merit a “serious response. . . .”

In a move that indicates the US is getting itself ready for the option of an armed strike against Syria, Washington is repositioning naval forces in the Mediterranean.

US Defense Secretary Chuck Hagel said that Obama has asked the Defense Department to prepare options for all contingencies. “We have done that, and we are prepared to exercise whatever option — if [the president] decides to employ one of those options,” he told reporters. . . .

Turkish Foreign Minister Ahmet Davutoğlu spoke to US Secretary of State John Kerry on Saturday to discuss ways to respond to an alleged Syrian gas attack, the US State Department said on Saturday.