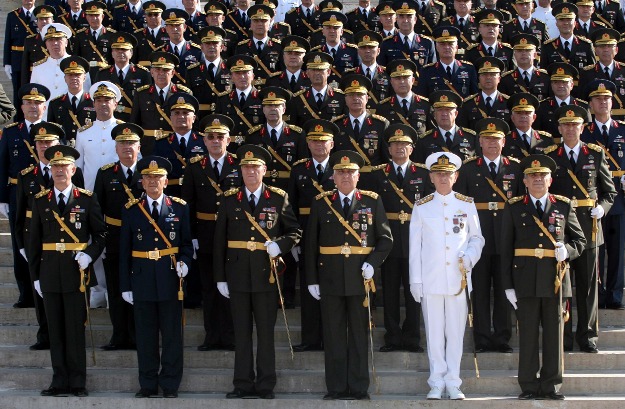 From Ayla Jean Yackley, Reuters:  The Turkish military retired all 40 generals and admirals currently jailed facing charges of conspiring against the government in a further sign of greater civilian control of the once all-powerful army.

President Abdullah Gul approved a decision at the end of a four-day meeting of the Supreme Military Council (YAS) to retire 55 generals and admirals, the General Staff said on its website on Saturday.

The decision marked a departure from last year’s tumultuous YAS when the top four commanders quit before the meeting even began to protest the jailing of hundreds of officers, including 20 percent of the military’s generals.

Journalists, lawyers and politicians are also in jail on charges of seeking to undermine Erdogan for what they allegedly perceived as his efforts to wreck Muslim Turkey’s secular constitution.

YAS also appointed a new commander of the Second Army, which oversees Turkey’s defenses against any prospective attack by Syria, Iran and Iraq.

From Dan Bilefsky, the New York Times:  Asli Aydintasbas, a columnist for the Turkish daily newspaper Milliyet, said in a telephone interview on Saturday that the commanders who were retired should have been allowed to retain their positions until a verdict in their cases was reached.

She suggested that the move was part of an attempt to declaw the military.

“Based on human rights and the concept of innocent until proven guilty, these commanders, who may be innocent, should not have been forced to retire,” she said. “It seems odd and little more than an excuse to reshape the military.”

Moreover, she noted, it has emerged that some of the evidence in one of the key plots implicating the commanders — known as the Sledgehammer case — had been fabricated, calling all of the trials surrounding the case into question.

From Murat Onur, Christian Science Monitor:  Hundreds of retired and active officers are being investigated as a part of these investigations. More than 180 of them are in pre-trial detention, including the former chief of the Turkish armed forces, former chiefs of the Navy and Air Force, and several high-profile generals and admirals.