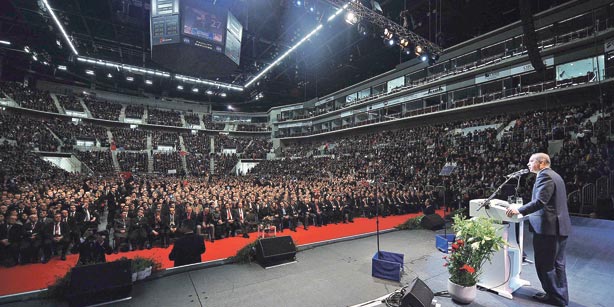 From Zaman:  PM Recep Tayyip Erdoğan on Monday firmly ruled out any NATO intervention in the Libyan crisis, while he strongly criticized European countries due to their “double-standard” approach towards developments in North Africa.

“What has NATO to do in Libya? NATO’s intervention in Libya is out of the question. We are against such a thing,” Erdoğan said in a speech delivered at a meeting organized by the Turkish-German Chamber of Commerce and Industry (TD-IHK) in Hanover.

Last Friday, NATO’s top-decision making body said the organization will not intervene in the Libyan crisis, but will continue to monitor the situation closely. The North Atlantic Council said in a statement that it will continue to monitor the situation “in coordination with other international organizations” and “continue to consult in order to be prepared for any eventuality.” Erdoğan also responded to certain criticism directed against him for not releasing a blunt and public warning to Libyan leader Muammar Gaddafi. “We are ruling a state, not a tribe,” Erdoğan said. He also stressed that Libya has de facto been divided into two parts and that he wished to see a reunited Libya. Praising Turkey’s principled stance on developments in North Africa, Erdoğan slammed European countries for failing to display a strong stance.