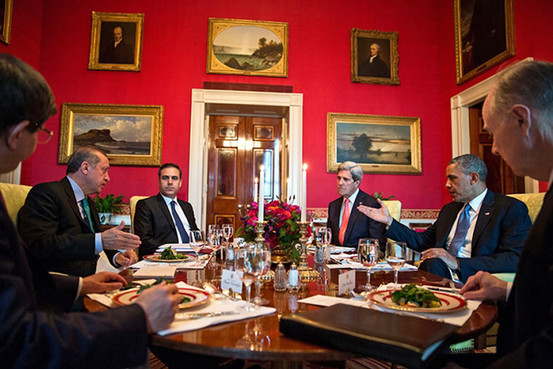 “Hakan Fidan [Turkey’s powerful spymaster] is the face of the new Middle East,” says James Jeffrey, who recently served as U.S. ambassador in Turkey and Iraq. “We need to work with him because he can get the job done,” he says. “But we shouldn’t assume he is a knee-jerk friend of the United States, because he is not. . . .”

Mr. Fidan’s ascension is remarkable in part because he is a former noncommissioned officer in the Turkish military, a class that usually doesn’t advance to prominent roles in the armed forces, business or government.

Mr. Fidan earned a bachelor of science degree in government and politics from the European division of the University of Maryland University College and a doctorate in political science from Ankara’s elite Bilkent University. In 2003, he was appointed to head Turkey’s international-development agency.

He joined Mr. Erdogan’s office as a foreign-policy adviser in 2007. Three years later, he was head of intelligence.

“He is my secret keeper. He is the state’s secret keeper,” Mr. Erdogan said of his intelligence chief in 2012 in comments to reporters. . . .

U.S. officials believe the MIT under Mr. Fidan passed several pieces of intelligence to Iran, including classified U.S. assessments about the Iranian government, say current and former senior U.S. and Middle Eastern officials. U.S. officials say they don’t know why Mr. Fidan allegedly shared the intelligence, but suspect his goal was relationship-building. After the Arab Spring heightened tensions, Mr. Erdogan pulled back from his embrace of Tehran, at which point U.S. officials believe Mr. Fidan did so, too. . . .

In 2012, Mr. Fidan began expanding the MIT’s power by taking control of Turkey’s once-dominant military-intelligence service. Many top generals with close ties to the U.S. were jailed as part of a mass trial and convicted this year of plotting to topple Mr. Erdogan’s government. At the Pentagon, the jail sentences were seen as the coup de grace for the military’s status within the Turkish system.

Mr. Erdogan wanted to remove Mr. Assad not only to replace a hostile regime on Turkey’s borders but also to scuttle the prospect of a Kurdish state emerging from Syria’s oil-rich northeast, political analysts say.

Providing aid through the MIT, a decision that came in early 2012, ensured Mr. Erdogan’s office had control over the effort and that it would be relatively invisible, say current and former U.S. officials.

Some moderate Syrian opposition leaders say they immediately saw that arms shipments bypassed them and went to groups linked to the Muslim Brotherhood. Mr. Erdogan’s Islamist-rooted Justice and Development Party has supported Muslim Brotherhood movements across the region.