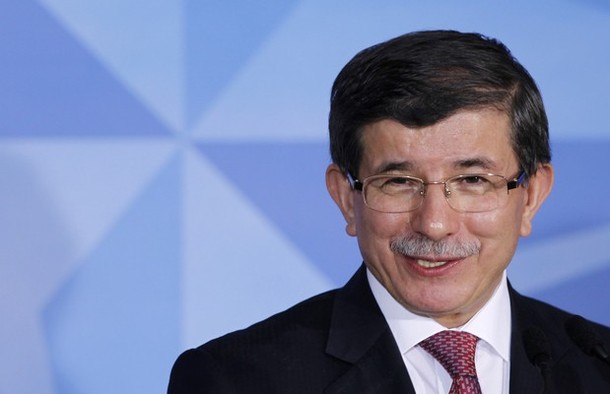 From Ahmet Davutoglu, NATO:   It is a great honour for me to be in NATO. It is a very familiar place for us, our home. But this time, for the Sixtieth Anniversary of Turkish Membership to NATO, I have the honour to meet with his Excellency the Secretary General and also with the NATO Council.

Turkish membership to NATO was a strategic decision in Cold War. From that time, in sixty years, international system has changed. NATO has been transformed. Turkey had a long process of reforms. But one thing has remained without any change. NATO has been one of the main pillars in our strategic planning and vision in Turkey. And Turkey has been one of the main contributors to NATO in the efforts of regional and global peace. And this will continue.

Today, we need NATO more… even more than in 1952. During the Cold War, NATO has functioned in a bipolar structure. And Turkey has been one of the most geopolitical… most important flank of NATO. We won Cold War. But at that time in 1990… early 1990s, many people discussed whether NATO will continue to be an important international security organization. In 1990s, it has been proven that NATO has contributed to regional and global peace through responding to the crisis, to several problems in this era of transformation.

And after 9/11, we had this time the challenge in Afghanistan. After 1990s, the challenges in Eastern Europe. Today, we are in a new international environment, in a new strategic framework.

And in this new strategic environment which bring new threats, new risks, new challenges, like the global economic crisis and its consequences in Europe, like the comprehensive transformation and unrest and transformation together in the Middle East and many other challenges in international arena, NATO can play a significant role to provide security.

And this, we had the experience of Libya last year. And Turkey in the middle of all these crisis points has been an island of stability, having economic development, strong economic dynamism, as well an active contributor to the regional peace around Turkey.

And here, in this new era, Turkey and NATO, together and as a family, where Turkey is part of the family, we will plan for the responding to the new challenges in the future. And the Sixtieth Anniversary of our membership will be a good opportunity to make a reassessment of all these common strategic priorities for further planning.

And I will welcome you, Mister Secretary General, to Turkey in February for our anniversary meetings, celebrations let me say. And of course, Turkey will continue to contribute in all NATO activities in an efficient way.