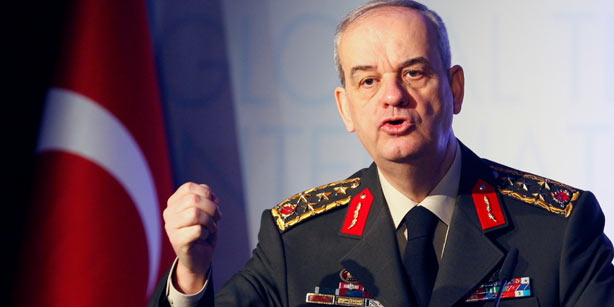 From Today’s Zaman:  An indictment seeking aggravated life imprisonment for former Chief of General Staff retired Gen. İlker Başbuğ on coup charges was accepted by an İstanbul court on Wednesday.

Başbuğ was put behind bars by an İstanbul court after he testified last month as a suspect in an investigation into an alleged Internet campaign to discredit Prime Minister Recep Tayyip Erdoğan’s Justice and Development Party (AK Party). Turkey has seen retired generals jailed in coup cases over the past few years, but Gen. Başbuğ, who retired in 2010, is the highest-ranking officer to be involved in legal proceedings thus far. Başbuğ was placed in Silivri Prison, where most of the coup suspects have been sent.

The indictment, submitted to the İstanbul 13th High Criminal Court last month, accuses Başbuğ of “establishing or administering a terrorist organization” and “seeking to unseat the government of the Republic of Turkey by force.” In his defense, Başbuğ denied all the charges against him. The investigation in which Başbuğ is implicated concerns allegations that the Turkish Armed Forces (TSK) set up 42 websites to disseminate anti-government propaganda. Dozens of suspects, including Başbuğ, are currently accused of having started an online propaganda campaign against the AK Party with the goal of instilling in the public a fear that the government was attempting to instate a religious order based on Islamic law.

According to the 39-page indictment in which Başbuğ is the sole suspect, the ex-military chief confirmed allegations that he, as the land forces commander at the time, met with Constitutional Court Deputy President Osman Paksüt in secret on March 4, 2008, at the Land Forces Command headquarters.

The meeting took place seven days after a constitutional amendment regarding the wearing of headscarves in universities, sponsored in Parliament by the ruling Justice and Development Party (AK Party), was challenged at the Constitutional Court and 13 days before a suit against the AK Party was filed with the court, seeking to shut it down over allegations that it had become a focal point of anti-secular activity.

When it was exposed later in 2008 that this meeting, which took place at a critical time for Turkey, raised suspicions about the influence of the Turkish military on the court’s rulings.

The indictment also stated that the anti-government content of the propaganda websites, which mostly warned of the threat of religious fundamentalism in the country, was used as evidence in the AK Party closure case launched in 2008.  (photo: AP)