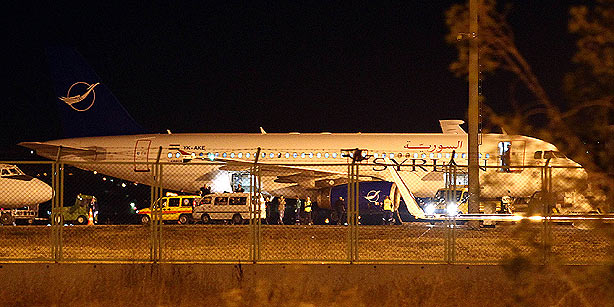 From Suzan Fraser, AP:  State-run TRT television said an Airbus A320 coming from Moscow was intercepted by F16 jets as it entered Turkish airspace and escorted to the capital’s Esenboga Airport. The station said authorities grounded the plane on suspicion that it was carrying heavy weapons.

Foreign Ministry Spokesman Selcuk Unal confirmed to the Associated Press that a Syrian plane was forced to land.

"We asked a Syrian civilian plane to land," he said in an email. "We are investigating. . . ."

Private NTV television said there were 35 passengers on board the plane.

Meanwhile, Turkish authorities declared the Syrian airspace to be unsafe and were stopping Turkish aircraft from flying over the civil-war torn country, the Foreign Ministry said.

TRT television said a Turkish plane that had already taken off for Saudi Arabia made a detour and landed at a Turkish airport.

From Zaman:  Turkish Foreign Minister Ahmet Davutoğlu said in an interview with a Turkish network late on Wednesday that the intelligence suggested that the Syrian plane was carrying “non-civilian cargo” and “banned material.”

He said the plane was forced to land because of information that it may be carrying "certain equipment in breach of civil aviation rules."

The move comes amid heightened tensions between Turkey and Syria, which have been exchanging artillery fire across the volatile border in the past week.  Davutoğlu said Turkey was within its rights under international law to investigate civilian planes suspected to be carrying military materials.

He added that Turkish officials are currently inspecting the plane and that the results will be clear in upcoming hours.

Turkish foreign minister noted that whatever the inspectors find in the plane, Turkey will act in line with the international law and declined to unveil the source of the intelligence obtained by Turkey. . . .

When asked if the plane was carrying arms, Davutoğlu declined to comment and said the material was banned to be carried by civilian cargoes.

Davutoğlu also dismissed claims suggesting that Russian President Vladimir Putin delayed his visit due to deepening divisions between Turkey and Russia over the festering Syrian conflict. He said he doesn’t think the landed Syrian plane will any way harm Turkish-Russian relations. He said Putin’s schedule was already a tentative one and that officials fixed his date in November.   (photo: Reuters)