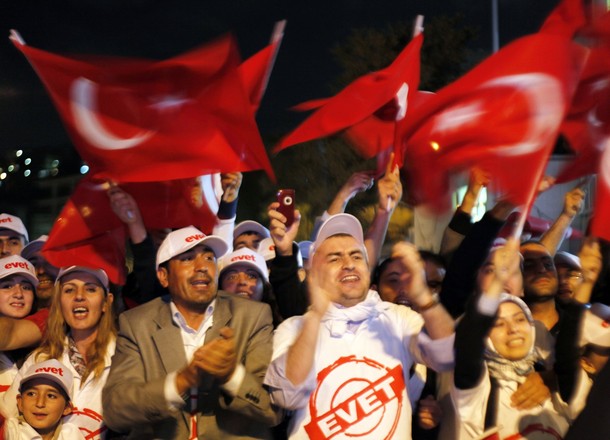 From Sebnem Arsu and Dan Bilefsky, the New York Times:  Turkish voters approved a sweeping package of constitutional reforms by a wide margin on Sunday, handing a major victory to the Islamist-rooted government and marking another concrete step in an inexorable shift in power away from the secular Westernized elite that has governed modern Turkey for most of its history. …

With nearly 96 percent of the ballot boxes counted late Sunday night, the package of 26 constitutional amendments passed with 58 percent of the vote, the semi-official Anatolian News Agency reported. About 41 percent voted against the measure.

“The ‘yes’ verdict in today’s referendum is a result of our nation’s longing for democracy,” [Prime Minister Recep Tayyip] Erdogan said in a live television broadcast, his speech often interrupted with supporters chanting “Turkey is proud of you. …”

The heated debate over what both sides cast as the future of this Muslim democracy on Europe’s edge drew nearly 36 million voters to the polls, a remarkable 73 percent of eligible voters, Anatolian News Agency reported. …

The package includes popular and relatively uncontroversial measures that would strengthen the rights of women, children, workers and civil servants, while making the military answerable to civilian courts.

But proposals to strengthen the president and Parliamnet’s control over the appointment of judges and prosecutors are seen by critics as a barely veiled attempt to erode the separation of powers between the executive and the judiciary.

The amendments, for example, will assign greater power to Parliament and the president to choose members of the Constitutional Court and the Senior Board of Judges and Prosecutors, both of which have traditionally been guardians of the secular state.  (photo: Reuters)