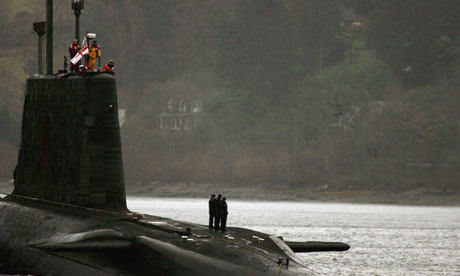 From Guardian:  Two Scottish National party members of the Scottish parliament who led a rebellion against proposals for an independent Scotland to join Nato have resigned in protest.

John Finnie and Jean Urquhart, both MSPs in the Highlands, announced they had quit after the party very narrowly voted to overturn the decades-long ban on Nato membership, following an intense conference debate on Friday.

Their resignations mark the first major revolt against Alex Salmond’s leadership since the SNP won power at the Scottish parliament in 2007, illustrating the scale of the controversy over the new pro-Nato policy.

The rebels insisted it was hypocritical and probably unworkable for the party to support the idea of Scotland joining a nuclear-armed military alliance while at the same demanding that the UK removes the Trident nuclear weapons system from its base on the Clyde.

Finnie, a former police officer who joined the SNP at 16 and has been an open critic of Scottish government policy, said: "I cannot belong to a party that quite rightly does not wish to hold nuclear weapons on its soil, but wants to join a first-strike nuclear alliance. . . .

Urquhart, a Campaign for Nuclear Disarmament member for 35 years who been considering whether she might resign before Friday’s vote, said: "The issue of nuclear disarmament and removing Trident from Scotland’s waters is a red-line issue for me, and I could not remain committed to a party that has committed itself to retaining membership of Nato.