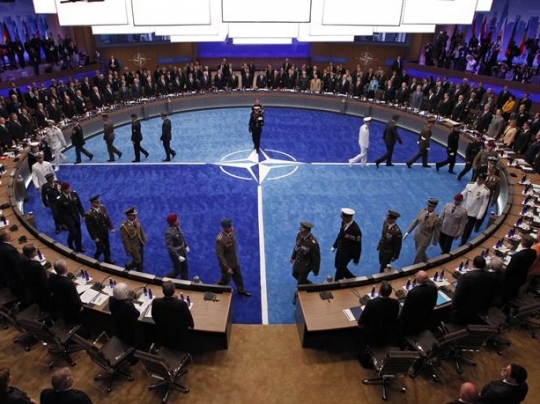 From Anne-Marie Slaughter, WE-NATO:  As I said and wrote before the NATO summit (here and here), one of the most important dimensions of this summit was Secretary General Anders Fogh Rasmussen’s articulated vision of NATO as “the hub of a network of global security partnerships,” a vision underlined by U.S. National Security Adviser Ben Rhodes. NATO itself has over 40 country partners. . . .

I have discussed these ideas in multiple fora in Germany and London over the course of a ten-day tour through Europe after the NATO summit and heard a variety of reactions. I come away with a much clearer impression of two NATOs in one. The first NATO is the “core NATO,” a “collective defense alliance” in which all 28 members are pledged to regard an attack on one as an attack on all under Article 5. For this NATO the issues of ensuring that all members meet their 2% of GDP defense spending commitments and of further enlargement in the Western Balkans and to the East will remain critical. This NATO will be much more concentrated on operating within the wider European space. It will still require agreed action by all 28 members. And it will still be primarily a “hard security” alliance, meaning a focus on deterrence and war-fighting. It is unlikely soon again to follow the United States into wars far beyond Europe’s borders, even if the U.S.were inclined to fight them.

The second NATO, however, is an emerging “global NATO.” That NATO will be a collective security asset for its global partners, providing a wide variety of resources from expertise to air support to boots on the ground. It will be at least open to engagement of many different kinds far beyond Europe’s borders, but it will not require the participation of all NATO members. It will require the agreement of all members to the action, as it did for the Libya action in March 2011 (Germany agreed to the action even though it abstained in the vote to intervene in the UN Security Council). But only those members that wish to participate and commit their dedicated assets will carry out the action. This NATO will also invest more in soft security assets, such as the new Comprehensive Crisis and Operations Management Centre, which brings together civilian and military expertise on crisis identification, planning, operations, reconstruction and stabilization capabilities. . . .

NATO members do not have to choose between the first and the second NATO. NATO can be simultaneously a Euro-Atlantic collective defense alliance and the hub of a growing global security network and can find ways to have each role reinforce the other. Whither NATO? Many directions at once.