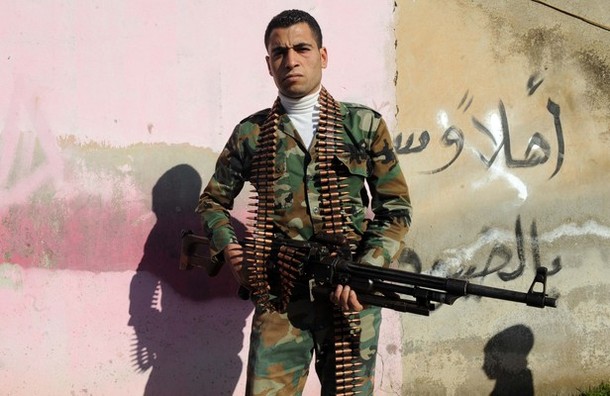 From Michael Peel and Roula Khalaf, the Financial Times:  “It doesn’t matter if [the intervention] is Nato or the Arab League – anything to protect civilians,” says Firas, a member of a co-ordinating committee in Zabadani. Anas, a fellow regime opponent, calls for a no-fly zone like that enforced for months by Nato jets in the skies over Libya.

Yet such appeals have been consistently rebuffed with the same refrain in western and Middle Eastern capitals – Syria is not Libya, they say. Hillary Clinton, US secretary of state, dismisses the comparison as a “false analogy”. On Friday, states concerned about the crisis are to meet in Tunis for the first “Friends of Syria” conference. Although the meeting has echoes of the “Friends of Libya” coalition that organised and co-ordinated the Nato-led mission, those opposed to the increasingly violent rule of Bashar al-Assad, Syrian president – including western countries, Gulf states and Turkey – will be searching for an alternative that does not this time involve military intervention. . . .

John McCain, the Republican US senator, has called for a Senate committee hearing on possible Pentagon contingency planning for intervention, insisting that now is not the “time to rule out any option that could save innocent lives in Syria”. The Syrian National Council, an umbrella opposition group, is shifting from demands for greater diplomatic pressure to open calls to help the Free Syrian Army, a loose organisation that includes defectors from the military and local volunteers.

“The consensus now is that because there is no outside intervention, the only way is to provide the FSA with the means to protect the population,” says Basma Kodmani, a Paris-based FSA official. . . .

The precarious regional situation leaves Mr Assad’s foreign opponents with two apparently conflicting goals – they want the regime to go, but in a controlled way and without official outside intervention. Salman Shaikh of the Brookings Doha Centre, a Qatar-based offshoot of the US’s Brookings Institution, says the external powers are trying to reconcile these desires by adopting a two-track approach. Western states apply diplomatic pressure and offer humanitarian assistance; regional countries back the armed opposition, under cover of an Arab League resolution this month that calls for political and material support for the rebels. . . .

[N]either Homs nor Madaya nor Zabadani are anywhere close to becoming a Syrian Benghazi – and therein lies one of the main practical difficulties for the armed anti-regime forces and the calls for outside intervention. The absence of a Libya-style large contiguous opposition-held area is a big obstacle to military help, as is the localised nature and lack of co-ordination of the groups that call themselves the FSA. Swaths of Syrian territory are no longer under the control of government forces, which can fight their way in but not stay. Yet these contested zones are scattered – some near the borders with Lebanon, Jordan and Turkey, others on the outskirts of big cities.

For states that want Mr Assad out but shy away from intervention, there is another source of anxiety: the political opposition’s lack of unity.

For all its faults and tensions, the Libyan rebellion managed to remain broadly cohesive and representative until it had toppled Gaddafi, strengthened along the way by a stream of political and military defectors from the regime. In Syria, by contrast, there are arguments over the make-up of the SNC, with some saying it has too many Islamists, while anti-Assad factions disagree over whether there should be military intervention. . . .

This sense of impotence seems reflected in western and Arab capitals, where diplomats are left to hope that the combination of armed action on the ground and political pressure abroad will cause cracks within the higher ranks of the regime. Analysts say this outcome is unlikely as long as Mr Assad retains the support of Russia and China. Samir Seifan, a Syrian economist who has joined the opposition, says a group of former officers who were close to Mr Assad’s father Hafez – ruler of the country for 30 years until his death in 2000 – approached Bashar with an initiative for a transition. This was rejected, but it highlights an unease within the ruling elite that could yet be harnessed.

If the regime remains united and the death toll mounts as the conflict becomes still more militarised, however, the shadow of Libya will loom ever larger. The international consensus against intervention, particularly without UN approval, could change if Assad forces maintain their assault without apparent check.

“If Assad continues on this path, there will have to be some outside intervention,” says Radwan Ziadeh, an SNC member. “The momentum is moving [in that direction], even if the price is very high.”   (photo: Getty)