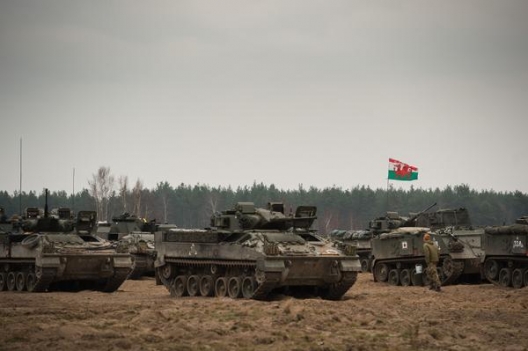 From SKY News:  More than 1,000 British troops and 500 armoured vehicles have been taking part in a military exercise in Poland, in a display of force not been seen since the Cold War.

In a highly symbolic image, Challenger Tanks and Warrior armoured fighting vehicles have been on manoeuvres on the plains of Eastern Europe.

Some 1,350 soldiers from The King’s Royal Hussars, 1st Battalion The Royal Welsh and 26 Engineer Regiment are involved.

It is intended as a show of strength against an increasingly aggressive Russian neighbour. . . .

Black Eagle is the largest British commitment to the region in almost a decade.

The Challenger tanks last saw action in Iraq in 2003. Some of them were brought out of storage in Germany.

From the BBC:  This is the furthest east in Europe British tanks have been.

And it’s a direct response to the actions of a near neighbour – Russia’s intervention in Crimea and eastern Ukraine. . . .

When the UK announced its commitment to the exercise in July this year, Defence Secretary Michael Fallon criticised Russia’s “illegal annexation of Crimea and its destabilisation of eastern Ukraine.”

He said: “It is right that Nato members and partners demonstrate our commitment to the collective security of our allies in Eastern Europe.”