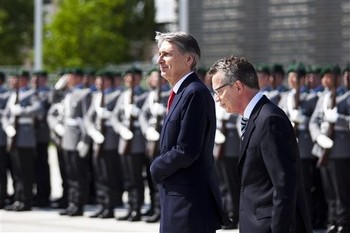 From Gareth Jones, Reuters:  Britain urged Germany on Wednesday to beef up its contribution to European defence and security, in line with its economic might, as the United States focuses increasingly on the Asia-Pacific region.

British Defence Secretary Philip Hammond said he did not expect Germany, Europe’s largest economy, to spend more money in a time of general belt-tightening but said there was ample scope to improve the effectiveness of its forces.

"Due to Germany’s historic reluctance to deploy and operate overseas, I think it is self-evident that there is still huge potential in German defence structures to deliver more usable firepower to the (NATO) alliance," he told reporters.

Speaking after talks in Berlin with German Defence Minister Thomas de Maiziere, Hammond said Germany spent only a little less on defence in absolute terms than France and Britain but that the amount was much smaller in proportion to its economy.

"(It is about) a willingness to pick up the burdens that go with having a globally important economy… Germany recognising that it can’t continue to be the dominant economy in Europe without also significantly increasing its military capability."

"This is not about the budget but about turning the forces it is already paying for into a more deployable, more usable force," Hammond said.  (photo: AP)