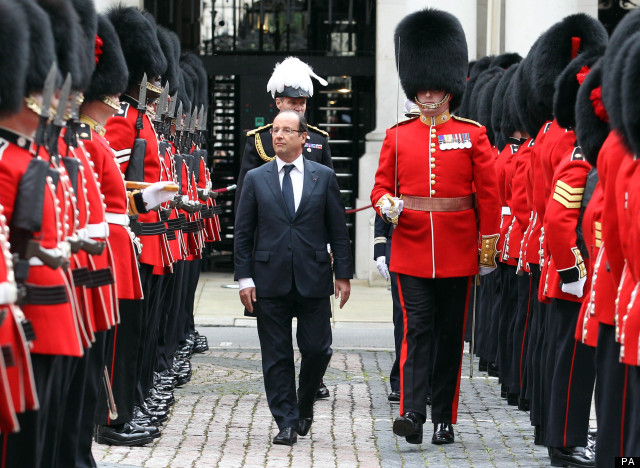 From Mohammed Abbas and Mark John, Reuters:  Dubbed the "entente frugale" by wags and criticised by some as a dangerous dilution of military sovereignty, Franco-British defence cooperation is nonetheless growing stronger.

Shrinking budgets, a less indulgent United States and Europe’s diminishing military clout in the world have bolstered the two countries’ determination to work together.

That contrasts with the prickly relations between French and British politicians, who have come to blows in recent months on everything from taxes to the European Union budget.

"While the politicians may trade barbs, defence knows there’s nowhere else to go other than working closely together," said James Arbuthnot, head of the British parliament’s Defence Select Committee. . . .

But there have been hiccups in the complex business of bringing Europe’s two biggest militaries together.

Britain has in recent weeks helped France with logistics in Mali, where French forces are battling Islamist rebels, but senior military officials had to step in when British pilots refused to carry French ration packs containing matches.

"So what? You can’t carry matches or lighters on British military planes. I think we can work around that," said a French military official, speaking on condition of anonymity. . . .

Since the Lancaster House defence cooperation treaties of 2010, Britain and France have joined forces to counter Islamists in Mali and helped topple Libya’s Muammar Gaddafi.

And in an unusual step that Arbuthnot labelled an "extreme courtesy", France has invited Britain’s ambassador – along with a German diplomat – to help draft France’s next long-term military plan, the Livre Blanc.

U.N. Security Council members France and Britain together account for around half of European military spending, have armed forces of similar size and are unafraid to deploy troops – "We pay and we play", in the words of one British official. . . .

France and Britain played leading roles, along with the United States, in the 2011 NATO aerial campaign over Libya.

"Libya was their first conflict since the return to NATO military structures and they found it quite helpful. It was quite a formative experience for them," said a NATO diplomat. . . .

China, India and other emerging powers are increasing defence spending. The United States has made clear it is fed up with picking up much of the tab for European security and has demanded its allies do more as it pivots towards Asia.

"Look at the geopolitical evolution of the world. It’s not that we’re getting small due to our economic situation, it’s just that others are getting much bigger. The scale is no longer the nation state," said a French diplomatic source.   (photo: PA)