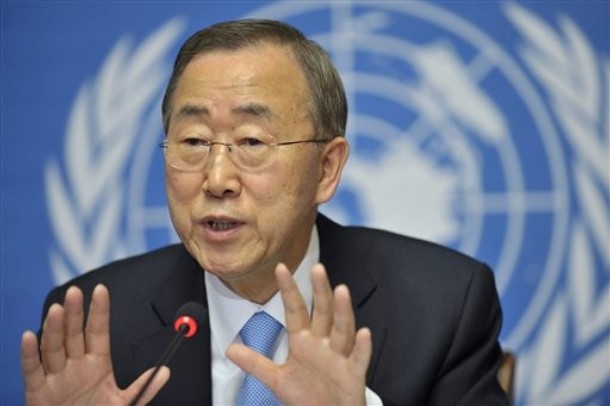 From Guy Desmond, Reuters:  U.N. Secretary-General Ban Ki-moon called on Wednesday for an "immediate, verifiable cease-fire" in Libya where rebels are fighting to end Muammar Gaddafi’s 41 years in power.

Ban was speaking in Geneva after talking with Libya’s Prime Minister Al-Baghdadi Ali al-Mahmoudi. There was no immediate direct response from the rebels or government.

Gaddafi’s government has made several cease-fire declarations but has continued its attacks on the besieged western city of Misrata and other rebel-held areas.

"He (Mahmoudi) even suggested the Libyan government was willing to have an immediate cease-fire with a monitoring team to be established by the United Nations and the African Union," Ban told a news conference.

"But first and foremost there should be an end to the fighting in Misrata and elsewhere. Then we will be able to provide humanitarian assistance and in parallel we can continue our political dialogue," Ban added.

Rebels said on Tuesday they made gains by driving back Gaddafi’s troops on the eastern and western edges of Misrata and encircling them at the airport.  (photo: AP)