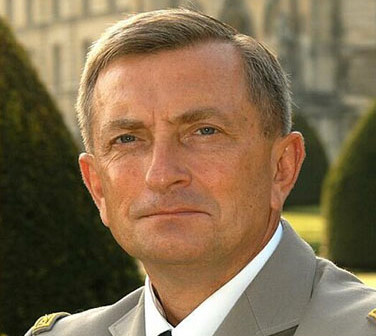 "The situation is worse than ever," he said.

"The traditional counter-insurgency doctrine, as employed by McChrystal for a year, with restrained use of firepower, air and artillery attacks to reduce collateral damage, does not seem to be working.

"If the McChrystal doctrine is not working or is not accepted, it would be good to review the strategy," argued the French general, calling for the pullout of US troops to be deferred past the planned date of July 2011. …

His comments were condemned by the French military’s chief of staff Edouard Guillaud on Friday, who described them as "irresponsible" coming from a French general, while French troops were serving in the Afghanistan mission. …

Guillaud said on Europe 1 radio: "It is an ill-timed comment and I would call it irresponsible because it comes from someone who is on active service and who therefore has credibility."

He said he would summon Desportes "to come and explain himself."  (photo: French Ministry of Defense)