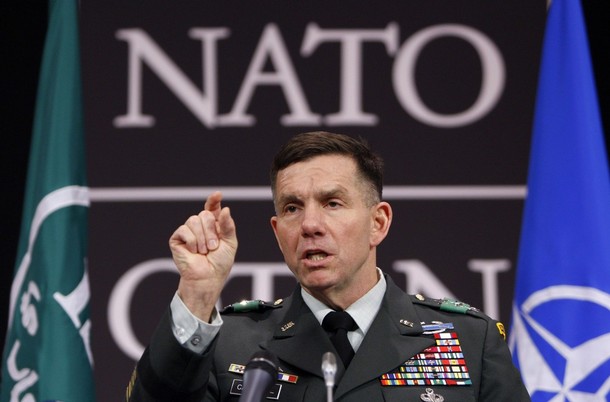 From Julian Barnes, the Wall Street Journal:The top U.S. general in charge of training in Afghanistan will ask allied leaders Monday for about 1,000 more specialized trainers, with the aim of speeding up the buildup of the country’s security forces ahead of a transfer of control to the Afghan government.

In an interview before his speech to the North Atlantic Treaty organization’s military committee in Brussels, Lt. Gen. William Caldwell said the additional trainers were critical to speed the growth of the Afghan police and army between December and May 2011. He said Afghanistan needed an additional 133,000 military personnel and police officers to ensure a smooth handover of security responsibility to the Afghan government next summer, when the U.S. is scheduled to begin drawing down its forces.

"If we do not get the trainers we need, transition will be delayed," Gen. Caldwell, who leads the training mission in Afghanistan said. …

Gen. Caldwell said it was more important for the allies to send trainers with the right skill sets to develop discrete capabilities within the Afghan security forces, than to just meet the 1,000-trainers goal.

Without specialized training, it will be difficult to make the Afghan security forces self-sustaining, Gen. Caldwell said.

He will specifically ask for pilots to help train Afghanistan’s air force, doctors to train medics, and European gendarmerie to supervise the national police forces. The U.S. will also ask NATO to send specialized military officers who can help the Afghans develop better intelligence analysis, equipment maintenance and logistics. …

In the past 10 months, NATO has trained nearly 100,000 people, four times as many as the U.S. military trained in a year, on average, between 2002 and 2009. Still, Gen. Caldwell acknowledged that it needs to speed up the pace to meet its 2011 goal for the Afghan security-force buildup.  (photo: Reuters)  (via Morning Defense)