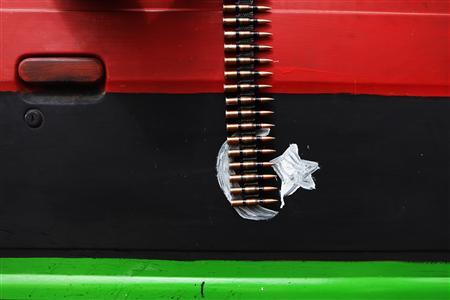 Obama signed the order, known as a presidential "finding", within the last two or three weeks, according to government sources familiar with the matter.

Such findings are a principal form of presidential directive used to authorize secret operations by the Central Intelligence Agency. This is a necessary legal step before such action can take place but does not mean that it will.

"As is common practice for this and all administrations, I am not going to comment on intelligence matters," White House spokesman Jay Carney said in a statement. "I will reiterate what the president said yesterday — no decision has been made about providing arms to the opposition or to any group in Libya."

From Mark Mazzetti and Eric Schmitt, the New York Times:  In addition to the C.I.A. presence, composed of an unknown number of Americans who had worked at the spy agency’s station in Tripoli and others who arrived more recently, current and former British officials said that dozens of British special forces and MI6 intelligence officers are working inside Libya. The British operatives have been directing airstrikes from British jets and gathering intelligence about the whereabouts of Libyan government tank columns, artillery pieces and missile installations, the officials said. …

In addition, the American spies are meeting with rebels to try to fill in gaps in understanding who their leaders are and the allegiances of the groups opposed to Colonel Qaddafi, said United States government officials, speaking on the condition of anonymity because of the classified nature of the activities.  American officials cautioned, though, that the Western operatives were not directing the actions of rebel forces. …

A former British government official who is briefed on current operations confirmed media reports that dozens of British Special Forces soldiers, from the elite Special Air Service and Special Boat Service units, are on the ground across Libya. The British soldiers have been particularly focused on finding the locations of Colonel Qaddafi’s Russian-made surface-to-air missiles. (photo: Finbarr O’Reilly/Reuters)