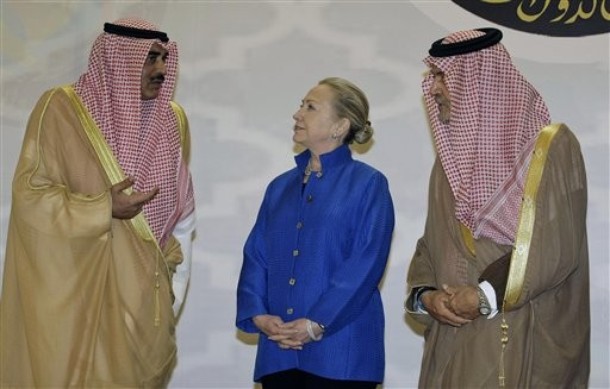 From Thom Shanker, the New York Times:  The United States and its Arab allies are knitting together a regional missile defense system across the Persian Gulf to protect cities, oil refineries, pipelines and military bases from an Iranian attack, according to government officials and public documents. . . .

Secretary of State Hillary Rodham Clinton, among the first to raise the need for the missile shield three years ago, sought to spur the gulf allies on during a recent visit to Saudi Arabia.

“We can do even more to defend the gulf through cooperation on ballistic missile defense,” she said during a session in March of the Gulf Cooperation Council, which includes Bahrain, Kuwait, Oman, Qatar, Saudi Arabia and the United Arab Emirates.

“Sometimes to defend one nation effectively you might need a radar system in a neighboring nation,” she said, adding, “But it’s the cooperation — it’s what they call ‘interoperability’ — that we now need to really roll up our sleeves and get to work on. . . ."

The objective in the gulf is shared by a more widely publicized missile defense shield being installed in Europe: to deter any Iranian attack and, if required, to blunt the effect of missiles launched against allied territory and American forces.

But the similarities end there. The administration’s European initiatives have been embraced by NATO and are being put into place after formal negotiations with countries that will host early warning radars, ground-based interceptors and Navy warships equipped to track ballistic missiles and shoot them down. . . .

If the planned European missile defense system is growing from a full engineering blueprint, the approach in the Persian Gulf is more like assembling a jigsaw puzzle. . . .

Three weeks ago the Pentagon announced the newest addition to Persian Gulf missile defense systems, informing Congress of a plan to sell Kuwait $4.2 billion in weaponry, including 60 Patriot Advanced Capability missiles, 20 launching platforms and 4 radars. This will be in addition to Kuwait’s arsenal of 350 Patriot missiles bought between 2007 and 2010.

The United Arab Emirates acquired more than $12 billion in missile defense systems in the past four years, documents show. In December, the Pentagon announced a contract to provide the Emirates with two advanced missile defense launchers for a system called the Terminal High Altitude Area Defense, valued at about $2 billion, including radars and command systems. An accompanying contract to supply an arsenal of interceptor missiles for the system was valued at another $2 billion, according to Pentagon documents.