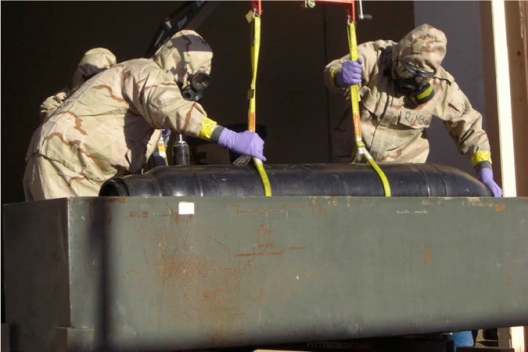 Even as the international effort to destroy Syria’s vast chemical weapons stockpile lags behind schedule, a similar American-backed campaign carried out under a cloak of secrecy ended successfully last week in another strife-torn country, Libya.

The United States and Libya in the past three months have discreetly destroyed what both sides say were the last remnants of Col. Muammar al-Qaddafi’s lethal arsenal of chemical arms. They used a transportable oven technology to destroy hundreds of bombs and artillery rounds filled with deadly mustard agent, which American officials had feared could fall into the hands of terrorists. The effort also helped inspire the use of the technology in the much bigger disposal plan in Syria.

Since November, Libyan contractors trained in Germany and Sweden have worked in bulky hazmat suits at a tightly guarded site in a remote corner of the Libyan desert, 400 miles southeast of Tripoli, racing to destroy the weapons in a region where extremists linked to Al Qaeda are gaining greater influence. The last artillery shell was destroyed on Jan. 26, officials said.

As Libya’s weak central government grapples with turmoil and unrest, and as kidnappings and assassinations of military and police officers accelerate in the country’s east, American and international weapons specialists hailed the destruction of the Libyan stockpile as a bright spot in an otherwise gloomy security environment.

“It’s a big breakthrough,” said Paul F. Walker, an arms control expert with the environmental group Green Cross International who has helped in efforts to demilitarize the American and Russian chemical weapons stockpiles since the 1990s. “Even though Libya’s chemical stockpile was relatively small, the effort to destroy it was very difficult because of weather, geography and because it’s a dangerous area with warring tribes, increasing the risks of theft and diversion,” he said.

Libya’s last two tons of chemical weapons were dwarfed by the 1,300 tons that Syria has agreed to destroy. But American and international arms experts say the need for easily transportable and efficient technology to wipe out the Libyan arms became a model for the Syria program now underway. . . .

Libya declared for destruction 24.7 metric tons of sulfur mustard, a syrupy liquid that when loaded into bombs or artillery shells and exploded creates a toxic mist that penetrates clothing, burns and blisters exposed skin, and can kill with large doses or if left untreated. The chemical was used extensively in World War I.

Libya had destroyed about half of these stocks when civil war broke out in 2011. Western spy agencies closely monitored the destruction site in the Libyan desert to ensure the stockpiles were not pilfered by insurgents.

When the new government took control in Tripoli that fall, it signaled its intent to finish the job. Libyan officials also surprised Western inspectors by announcing the discovery in November 2011 and February 2012 of two hidden caches of mustard, or nearly two tons, that had not been declared by Colonel Qaddafi’s government. That brought the total declared amount of chemical to 26.3 tons.

Unlike the majority of Libya’s mustard agents, which were stored in large, bulky containers, the new caches were already armed and loaded into 517 artillery shells, 45 plastic sleeves for rocket launchings and eight 500-pound bombs. . . .

Using $45 million from the Nunn-Lugar Cooperative Threat Reduction program, which has helped rid the former Soviet Union of thousands of nuclear weapons since the end of the Cold War, the Pentagon and its Defense Threat Reduction Agency tapped the Parsons Corporation, a construction firm based in Pasadena, Calif., to work with Libya to oversee the rebuilding and safeguarding of the Libyan disposal site, which had been ransacked during the civil war. . . .

Canada donated $6 million to help restore water, sewage service and electricity to the site, and to build living quarters for Western and Libyan contractors. Germany agreed to fly international inspectors to the site.

The project has relied on a custom-built device from Dynasafe, a Swedish company, to destroy the weapons. It is essentially a giant, high-tech oven called a static-detonation chamber. The munitions were fed through an automated loading system into a gas-tight chamber, where the toxic materials were vaporized at temperatures between 750 and 1,000 degrees Fahrenheit. Gases created in the process were scrubbed by special filters.