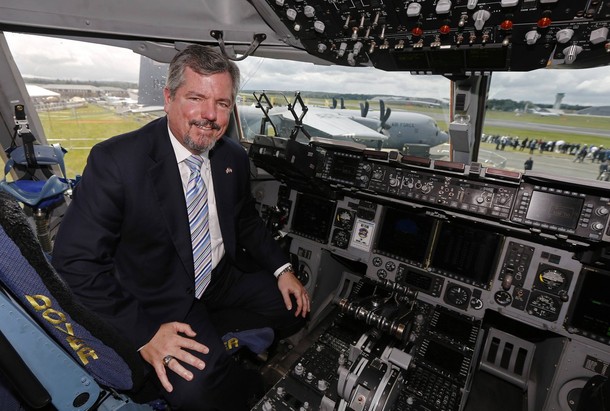 From Andrea Shalal-Esa, Reuters:  U.S. defense companies are trying to get creative as they gird for a decade of flat or declining military spending in Europe and the United States , eyeing more cooperation across borders, joint ventures, foreign sales and adjacent markets.

Dennis Muilenburg, president and chief executive of Boeing Co’s defense division, said his company is trying to preserve current spending on research and development – and possibly increase it – by cutting jobs and closing facilities as it seeks to slash overhead costs by $2 billion to $3 billion.

He said the defense division had already cut 8,000 jobs and reduced its facilities by 10 percent. More cuts were likely in the future, he added, even if Congress manages to avert $500 billion in defense cuts that are due to begin in January, on top of $487 billion in cuts already on the books.

"We’re anticipating that the defense budget downturn in both the United States and Europe is a longer-term downturn, so we expect that to be a relatively flat market for us over the next decade," Muilenburg told Reuters Insider in an interview. . . .

"There’s probably more damage in the uncertainty than in the actual cuts happening," Scott Donnelly, chief executive of Textron Inc., told Reuters in an interview, adding that he did not expect a recovery in the European economy in 2013. . . .

In the meantime, arms makers are looking to increased international sales and growth in areas such as unmanned vehicles, cybersecurity and even energy security, in Lockheed’s case, to offset sustained pressure on U.S. and European budgets. . . .

[Lockheed’s incoming president and COO Marillyn] Hewson said Lockheed will continue to invest in unmanned systems and cybersecurity, as well as technology advances aimed at keeping the Pentagon’s current warplanes, battleships and other weapons running longer and more capably. . . .

Partnerships and joint procurement programs will be a hallmark of future trans-Atlantic defense ties, said Michael Ryan, an official with the Pentagon’s European Command, who came to the air show to meet with industry executives and cultivate more cooperative efforts.

He said NATO was evaluating its procurement needs under a new "smart defense" policy aimed at encouraging more cooperative projects, such as one that allowed 12 countries to buy hours of use on the C-17 transport plane built by Boeing, rather than each country buying its own big plane.

"When you talk about high-end capabilities, it’s very difficult for any nation to afford on their own," Ryan told Reuters in an interview in the cockpit of an Air Force C-17.

He said NATO members had realized that transport, refueling and surveillance were all areas of high demand that could benefit from collaborative approaches and joint procurements. (photo: Reuters)