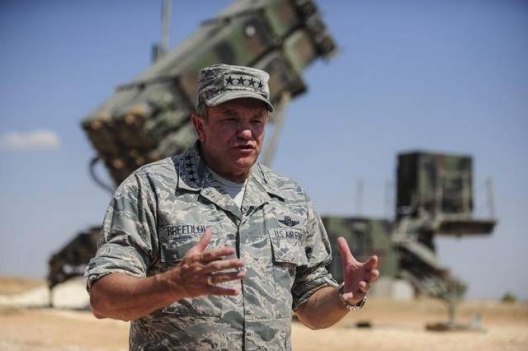 In the face of sustained Russian incursions into Ukraine and the dozens of fighter and bomber flights that have skirted European airspace in recent weeks, the head of US European Command has come to the Pentagon to ask for more troops and equipment.

“Because of the increased pressure that we feel in Eastern Europe now, and because of the assurance measures that we are taking in the Baltics, in Poland and in Romania, we require additional rotational presence,” Gen. Philip Breedlove, NATO’s supreme allied commander Europe, said at a Pentagon briefing Monday morning. . . .

European allies have grown restless over the increasing number of Russian military flights skirting their airspace in recent months, including an unprecedented 19 Russian military flyovers in one day last week. Breedlove said the increasing activity means that Russia is “messaging us that they are a great power and that they have the ability to exert these kinds of influences in our thinking.”

Breedlove warned that the NATO alliance is entering a “strategic inflection point” with Moscow, and that the seven Russian brigades along Ukraine’s eastern border have all but erased the border in many places.