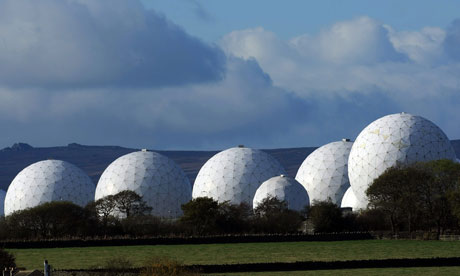 From Richard Norton-Taylor, the Guardian:  America’s largest eavesdropping centre in Britain, Menwith Hill in North Yorkshire, is being expanded in a multimillion-pound programme as it becomes increasingly vital to US intelligence and military operations , according to a study of the controversial base released on Thursday.

The base, which plays a key role in the global network of the National Security Agency (NSA), GCHQ’s American partner, now includes 33 radomes – commonly called "golf balls" after the white sheeting protecting the satellite receiving and transmission stations – and is undergoing a big construction programme.

The study describes the programme, called Project Phoenix, as "one of the largest and most sophisticated high technology programmes carried out anywhere in the UK over the last 10 years". Work on it has been reserved for US-based arms corporations including Lockheed Martin and Northrop Grumman, and their personnel with high-level security clearance, it notes.

Though the base is officially called RAF Menwith Hill, most of the staff there are US employees of the NSA. The total number of people working there is due to increase from 1,800 last year (of whom 400 were British) to 2,500 in 2015.

The costs to Britain of servicing Menwith Hill, like other American bases in Britain, are confidential under cost-sharing arrangements between the UK and the US. The total cost of the equipment at the base, and running it, is classified.

However, official figures released in the US show that this year the NSA is spending $68m (£43m) just on a generator plant to provide power for new supercomputers at the base.

Computers at the base are capable of carrying out 2m intercepts an hour, according to the Federation of American Scientists, an independent US body.  (photo: Christopher Furlong/Getty)