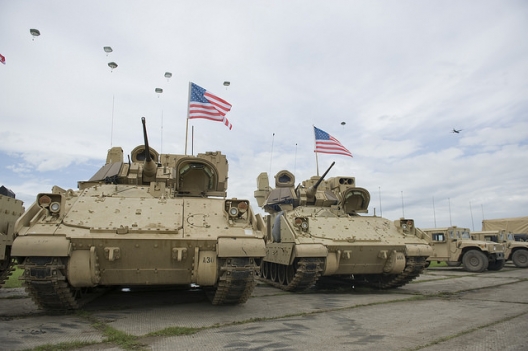 NATO and the United States are switching their defense doctrine from assurance to deterrence in Eastern Europe in response to a “resurgent and aggressive Russia,” the top US general in Europe said Thursday.

The comments by Gen. Philip Breedlove in the Latvian capital Riga come a day after the Pentagon said it would begin continuous rotations of an additional armored brigade of about 4,200 troops in Eastern Europe beginning in early 2017.

“We are prepared to fight and win if we have to … our focus will expand from assurance to deterrence, including measures that vastly improve our overall readiness,” Breedlove said following talks with Baltic region NATO commanders.

“To the east and north we face a resurgent and aggressive Russia, and as we have continued to witness these last two years, Russia continues to seek to extend its influence on its periphery and beyond….”

“In the spring of 2017 what we will bring to Europe, and then again put into the three Baltic nations, is an armored brigade fully enabled with command and control and all of the supporting equipment required,” Breedlove said.