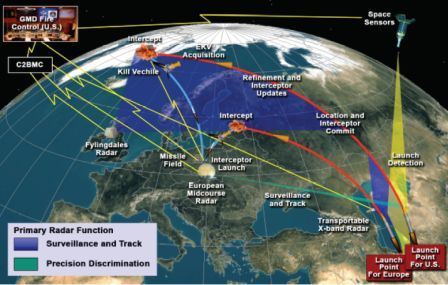 From William J. Broad, New York Times:  After two years of study, a panel of top scientists and military experts working for the National Research Council has concluded that the nation’s protections against missile attacks suffer from major shortcomings, leaving the United States vulnerable to some kinds of long-range strikes.

In a report, the panel suggested that President Obama shift course by expanding a system he inherited from President George W. Bush and by setting aside the final part of an antimissile strategy he unveiled in 2009. In so doing, the panel said, the president could set up the nation’s defenses to better defeat the kinds of long-range missiles that Iran may be developing.

It is the first time that the research council, an arm of the National Academy of Sciences, has weighed in on the nation’s overall plans for defeating missile attacks.

Chartered by Congress to give scientific and technical advice to the government, the council is considered to be the nation’s preeminent group of scientists. The 16-person panel consists of scientists, engineers and weapons experts from universities, research groups and national laboratories, including one in Livermore, Calif., that deals with nuclear arms.

Philip E. Coyle III, a former national security official in the Obama White House and a former director of weapons testing at the Pentagon, said the panel’s report exposed a system that should be rebuilt from top to bottom, adding that the antimissile complex was geared toward “producing and fielding hardware” rather than actually devising ways to deflect enemy attacks.

The Pentagon wrote off the report as pedestrian. Richard Lehner of the Missile Defense Agency, an arm of the Pentagon that erects the ground-based interceptors, called the panel’s alarm bells about the system’s limitations “an old story” and the need to focus more on enemy countermeasures unsurprising and “totally logical.”

In its highly technical, 260-page report, the panel recommended an overhaul that would make the antimissile system “far more effective,” including adding new sensors and interceptor rockets, as well as an additional base in Maine or upstate New York from which interceptors could be fired. The nation’s two existing bases are in California and Alaska. The report called the plan affordable, saying it could fit within current antimissile spending — which runs about $10 billion a year — if the military eliminated what the panel described as costly and unneeded systems, like a $28 billion constellation of satellites meant to track enemy warheads. . . .

Mr. Obama’s European shift is still a work in progress, and the report gave it conditional approval provided that the technical advances planned for the next six years, like improved sensors and interceptor rockets, actually materialize. But it recommended that the plan’s final phase — intended to protect the United States from long-range Iranian missiles — be scrapped in favor of the stronger domestic system.