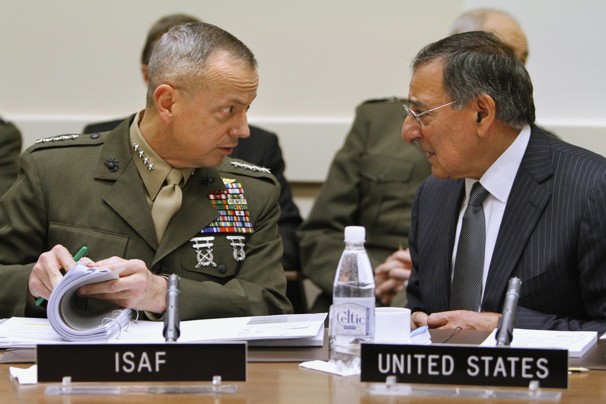 From Craig Whitlock, the Washington Post:  U.S. and NATO officials struggled Thursday to clarify how long their troops would remain engaged in combat in Afghanistan, a day after Defense Secretary Leon E. Panetta said U.S. forces would shift toward a training and advisory role next year.

Defense ministers from NATO’s 28 member countries met in Brussels to discuss how to wind down the war in Afghanistan. But a precise timetable of how that would unfold remained elusive as officials offered varying interpretations of their stated goal of handing over responsibility to Afghan security forces by the end of 2014.

One senior U.S. defense official, speaking on the condition of anonymity, said that the Afghan army would take over “lead combat responsibility throughout Afghanistan” next year but that U.S. and NATO forces would still be actively involved in combat in 2014, albeit in a supporting role.

That scenario contrasted with Panetta’s remarks on Wednesday, when he said that the Obama administration wants to complete the transition from “a combat role to a training, advise and assist role . . . hopefully by mid- to the latter part of 2013.”

Panetta’s stated timeline would represent an acceleration of the change in NATO’s military mission. He acknowledged that U.S. troops could still be involved in combat after 2013 but indicated that they would fight only to protect themselves. . . .

On Thursday, a senior NATO official had difficulty squaring Panetta’s comments about ending the combat role in 2013 with subsequent statements by other leaders.

“He said the combat role will come to an end,” the official said of Panetta, speaking on the condition of anonymity under ground rules set by the alliance. “But he also said combat will continue.”

The official said that U.S. and NATO forces would still be engaged in offensive combat operations in 2014 but with this difference: The Afghans would be in charge. . . .

Asked to elaborate on the difference between a “lead” combat role and a “supporting” role, the U.S. defense official said American troops would perhaps remain embedded with Afghan forces. But the official said the questions of who would issue orders and how tactical duties would be divided had not been resolved.  (photo: Jacquelyn Martin/AP)