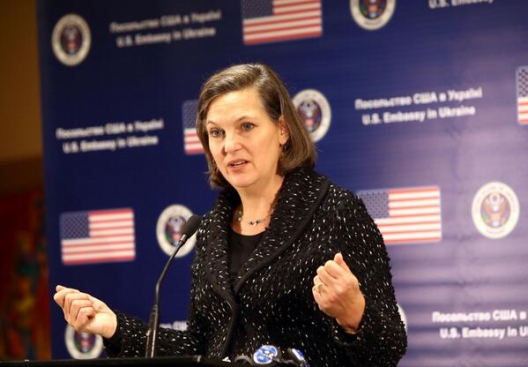 From Rosie Gray, BuzzFeed:  Top U.S. officials are strongly suggesting that Russia is responsible for recording and releasing the tape of a phone call between the top U.S. diplomat for Europe and the ambassador to Ukraine.

“Certainly we think this is a new low in Russian tradecraft in terms of publicizing and posting this,” said State Department spokeswoman Jen Psaki in the daily press briefing. “I don’t have any other independent details about the origin of the YouTube video.”

A woman who sounds like Assistant Secretary of State for European and Eurasian Affairs Victoria Nuland was caught on tape talking to U.S. Ambassador to Ukraine Geoff Pyatt about cutting deals in internal Ukrainian politics, with Nuland appearing to favor one opposition leader over another. Nuland is also heard to say “f— the EU” on the call. News of the tape, which has not been independently verified, was first reported in the Kyiv Post.

Psaki said that a senior Russian official had been the first to tweet about the call, and that “this is something they’ve been actively promoting, posting about, tweeting about.” The official that tweeted the call was an aide to Russian deputy prime minister Dmitry Rogozin, the Associated Press reported.

From Peter Baker, New York Times:  The conversation opened a window into the American handling of the crisis and could easily inflame passions in Kiev, Brussels and Moscow, where the role of the United States has been controversial. The White House on Thursday suggested that Russia, which has jockeyed with the United States and Europe for influence in Ukraine, played some role in the interception or dissemination of the conversation.

“The video was first noted and tweeted out by the Russian government,” Jay Carney, the White House press secretary, told reporters. “I think it says something about Russia’s role. . . .”

A link to the secret recording was sent out in a Twitter message earlier Thursday by the account of Dmitry Loskutov, an aide to Russia’s deputy prime minister. “Sort of controversial judgment from Assistant Secretary of State Victoria Nuland speaking about the EU,” the message said, clearly trying to drive a wedge between the United States and Europe. . . .

American diplomats have long assumed that their telephone calls were tapped by Moscow, but rarely if ever have the Russians made recordings public.

The administration official, who spoke on the condition of anonymity, said the fact that this one was made public was a sign of desperation by the Russians, who in this view are trying to stop the Americans from brokering a settlement of the standoff between President Viktor F. Yanukovych and the Ukrainian opposition. It came to light even as Ms. Nuland was in Kiev on Thursday talking with both Mr. Yanukovych and opposition leaders.

Mr. Loskutov, responding to messages from a reporter on Twitter, rejected the American assertion that he was first to disseminate the recording. “Disseminating started earlier,” he wrote in English, adding that his Twitter post was being “used to hang the blame” on Russia. Asked if Russia had any role, he said: “How would I know? I was just monitoring ‘the Internets’ while my boss was off to a meeting with the Chinese leader.”

From Reuters:  Nuland, who met President Viktor Yanukovich in Kiev on Thursday before the Ukrainian leader flew off to meet President Vladimir Putin at the Olympics in Russia, described the bugging and leaks as “pretty impressive tradecraft” but said it would not hurt her ties with the Ukrainian opposition. . . .