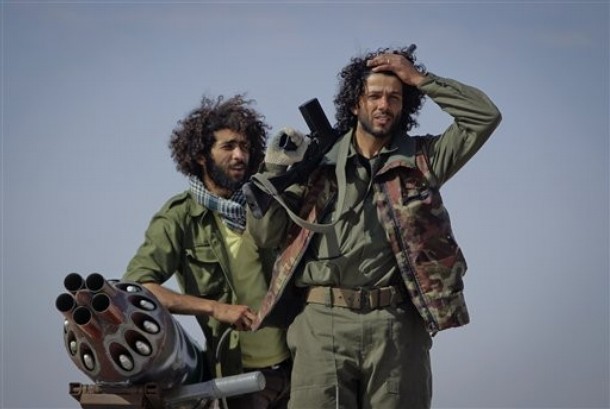 From David Cloud and Ned Parker, the Los Angeles Times:  The failure of the international air campaign to force Kadafi’s ouster, or even to stop his military from shelling civilians and recapturing rebel-held towns, poses a growing quandary for President [Barack] Obama and other NATO leaders: What now? . . .

Privately, U.S. officials concede that some of their assumptions before they intervened in the Libyan conflict may have been faulty. Among them was the notion that air power alone would degrade Kadafi’s military to the point where he would be forced to halt his attacks, and that the U.S. could leave the airstrikes primarily to warplanes from Britain, France and other European countries.

French President Nicolas Sarkozy and British Prime Minister David Cameron, who led the charge within NATO to launch the air campaign in Libya, argued last week that the alliance needed to step up its attacks to fulfill the United Nations mandate to protect civilians. But winning agreement to escalate the intervention could further divide the already badly split alliance.

The U.S. military moved into a support role early this month, and Obama has given no indication that he will send U.S. warplanes into combat missions again, let alone reconsider his promise not to use ground troops in Libya. . . .

If the alliance’s most powerful member isn’t willing to escalate, few other members will be eager to do so. . . .

Adm. James Stavridis, the U.S. commander of the North Atlantic Treaty Organization, has appealed to NATO members for additional attack planes — a request that U.S. officials made clear that other alliance members would have to meet. . . .

By the U.S. taking a back-seat role, it has a psychological effect on the mission," said Dan Fata, a former Defense Department official who was responsible for overseeing NATO issues during the George W. Bush administration. "If I’m Kadafi, I’m thinking I can probably wait the Europeans out."  (photo: AP)