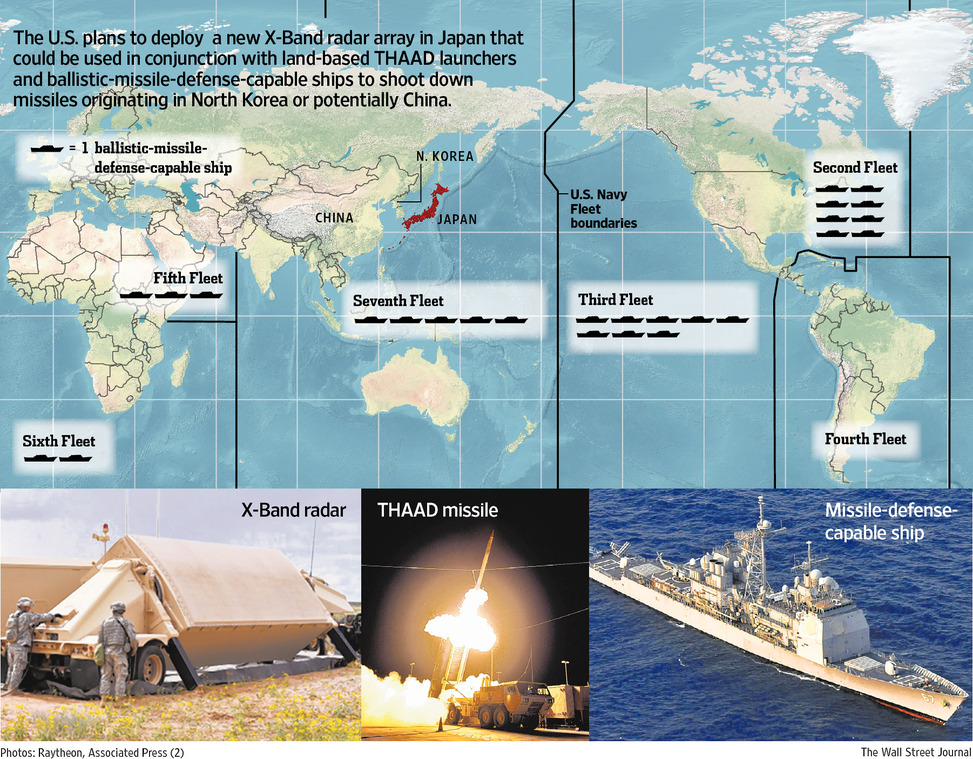 From Adam Entous and Julian E. Barnes, Wall Street Journal:  The U.S. is planning a major expansion of missile defenses in Asia, a move American officials say is designed to contain threats from North Korea, but one that could also be used to counter China’s military.

The planned buildup is part of a defensive array that could cover large swaths of Asia, with a new radar in southern Japan and possibly another in Southeast Asia tied to missile-defense ships and land-based interceptors.

It is part of the Obama administration’s new defense strategy to shift resources to an Asian-Pacific region critical to the U.S. economy after a decade of war in Iraq and Afghanistan. . . .

A centerpiece of the new effort would be the deployment of a powerful early-warning radar, known as an X-Band, on an undisclosed southern Japanese island, said U.S. defense officials. The Pentagon is discussing that prospect with Japan, one of Washington’s closest regional allies. The radar could be installed within months of Japan’s agreement, American officials said, and would supplement an X-Band the U.S. positioned in Aomori Prefecture in northern Japan in 2006. . . .

Officials with the U.S. military’s Pacific Command and Missile Defense Agency have also been evaluating sites in Southeast Asia for a third X-Band radar to create an arc that would allow the U.S. and its regional allies to more accurately track any ballistic missiles launched from North Korea, as well as from parts of China.

Some U.S. defense officials have focused on the Philippines as the potential site for the third X-Band, which is manufactured by Raytheon Co. Pentagon officials said a location has yet to be determined and that discussions are at an early stage.

The beefed-up U.S. presence will likely raise tensions with the Chinese, who have been sharp critics of U.S. ballistic missile defenses in the past. Beijing fears such a system, similar to one the U.S. is deploying in the Middle East and Europe to counter Iran, could diminish China’s strategic deterrent. Beijing objected to the U.S.’s first X-Band deployment in Japan in 2006. Moscow has voiced similar concerns about the system in Europe and the Middle East. . . .

Analysts say it is unclear how effective U.S. missile defenses would be against China. A 2010 Pentagon report on ballistic missile defenses said the system can’t cope with large-scale Russian or Chinese missile attacks and isn’t intended to affect the strategic balance with those countries.

The senior U.S. official said the new missile defense deployments would be able to track and repulse at least a limited strike from China, potentially enough to deter Beijing from attempting an attack. . . .

Mr. [Steven] Hildreth of the Congressional Research Service said the U.S. was "laying the foundations" for a regionwide missile defense system that would combine U.S. ballistic missile defenses with those of regional powers, particularly Japan, South Korea and Australia.

U.S. officials say some of these allies have, until now, resisted sharing real-time intelligence, complicating U.S. efforts. Territorial disputes between South Korea and Japan have flared anew in recent weeks, underlining the challenge of creating unified command and control systems that would be used to shoot down incoming missiles.

The U.S. has faced a similar problem building an integrated missile-defense system in the Persian Gulf. . . .

The Navy has drawn up plans to expand its fleet of ballistic missile-defense-capable warships from 26 ships today to 36 by 2018, according to Navy officials and the Congressional Research Service. Officials said as many as 60% of those are likely to be deployed to Asia and the Pacific.