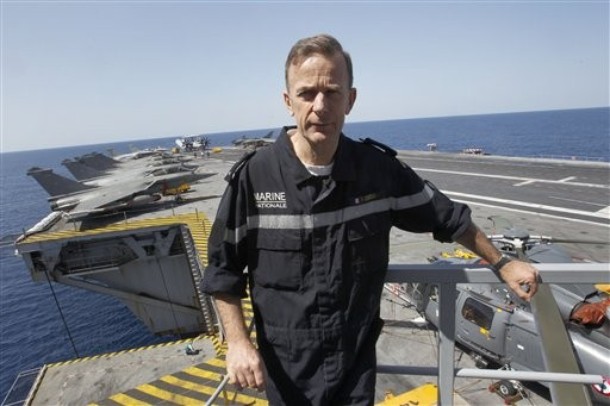 From Slobodan Lekic, the AP: [E]ven though the U.S. has withdrawn its forces from the front lines of the NATO campaign, a handful of Americans serving on this French navy carrier [Charles de Gaulle] remain at the forefront of the action.

"Because French carrier pilots are trained in the United States, this helps a lot with standardization of procedures," said Cmdr. Matthew Hogan, 44, Grass Valley, California. "We’re very comfortable operating with each other."

Hogan, who is nine months into a two-year posting at the naval base of Toulon in the south of France, serves on the flattop as a staff officer for Rear Adm. Philippe Coindreau, commander of the French fleet conducting the airstrikes against Libya. …

France currently has only a single carrier in its inventory, while the U.S. operates 11 of the floating air bases. The French therefore long ago decided it wasn’t cost-effective to organize a training program of their own for their pilots, but rely instead on U.S. Navy training.

The four American officers serving aboard live in or near the base in Toulon, but only Hoblet has his family with him. The others say they spend too much time at sea to make it worthwhile for their wives and children to relocate to a foreign country.  (photo: AP)