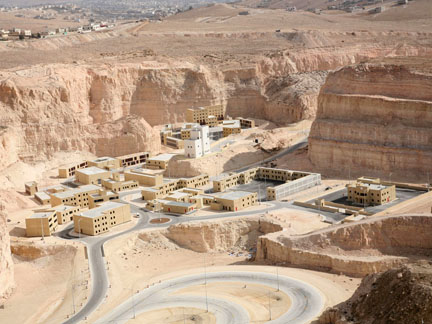 From Jamal Halaby, AP:  From the edge of a steep mountain overlooking a desert compound built into an old rock quarry, machine gunfire echoes just outside hangars where U.S. special operations forces are training Jordanian commandos.

The Americans, who arrived in the kingdom a few weeks ago at the request of the Jordanians, are helping them develop techniques to protect civilians in case of a chemical attack from neighboring Syria, according to Jordanian officials.

On the Syrian border farther north, British military officers recently assessed the dangers of rockets constantly falling on the kingdom and ways to shield the Jordanian population and Syrian refugees as President Bashar Assad widens his military offensive against rebel enclaves in the vicinity, according to Jordan-based Western diplomats.

Jordan’s King Abdullah II has repeatedly discussed plans for reinforcing security along the Syrian border and expressed concern over Syria’s chemical stockpiles in meetings with visiting Western allies, according to the two diplomats, who monitor Syria from their base.

They said it is believed that Abdullah has also been shopping around for an anti-missile defense system to shield his densely populated capital, Amman – home to nearly half of Jordan’s population.

There is also talk of contingency plans for a quick pre-emptive strike if Assad loses control over his stock of chemical weapons in the civil war. The fear is that those weapons might otherwise fall into the hands of al-Qaida or Lebanon’s Islamic militant group Hezbollah.

"There are dangers involved, and we have to ensure the safety of our country and the well-being of our citizens," a senior government official said in the first public Jordanian confirmation of the presence of foreign military personnel here. "We are benefiting from the experience of our allies as we prepare for the worst scenarios."

The presence of some 150 Americans at the King Abdullah II Special Operations Training Center northeast of the capital is a clear message to Assad that Jordan’s longtime Western allies stand ready to defend the country if it is dragged into the 19-month Syria conflict. . . .

On Wednesday, U.S. Defense Secretary Leon Panetta said at a NATO conference of defense ministers in Brussels that the U.S. has been working with Jordan to monitor chemical and biological weapons sites in Syria and was helping Jordan deal with refugees pouring over the border.

Although the senior government official insisted that the Americans were "advisers, not troops," two senior U.S. defense officials said most were Army special operations forces. The U.S. officials spoke on condition of anonymity because they were not authorized to comment publicly about the mission. . . .

"For Jordan, the more unstable Syria becomes, the deeper the crisis proceeds, the more likely Jordan will suffer from all kinds of spillover, but they are incapable of doing anything to intervene to try to turn the conflict in one direction rather than another unless they have the ballast, cover and involvement of serious international forces, which is the Americans," [Mideast analyst Rosemary] Hollis said.

She also saw the American military presence as a step toward possible future military operations to secure Syria’s chemical stockpiles. . . .

Torbjorn Soltvedt, a senior analyst with the Britain-based Maplecroft risk analysis group, said he saw the current situation as a "monitoring and training stage."

"Given the degree to which Syria’s chemical weapons stockpiles have been dispersed across the country, an operation to secure them would be extensive and require significant numbers of troops," he said. "The Pentagon has estimated that an operation to secure Syria’s chemical weapons stockpiles could require as much as 75,000 troops given the presence of several chemical agent manufacturing plants and many more storage sites throughout the country. . . ."

Jordanian officials have advocated a buffer zone inside the Syrian border to protect civilians fleeing bombardment. There is mounting speculation that Jordan would dispatch highly skilled special forces to secure such a zone when Assad’s regime falls to prevent chaos on its border.

In the past six weeks, more than 20 Syrian rockets have fallen on Jordanian villages near the border. At least two people were wounded, including a 4-year-old Jordanian girl.  (photo: AICI)