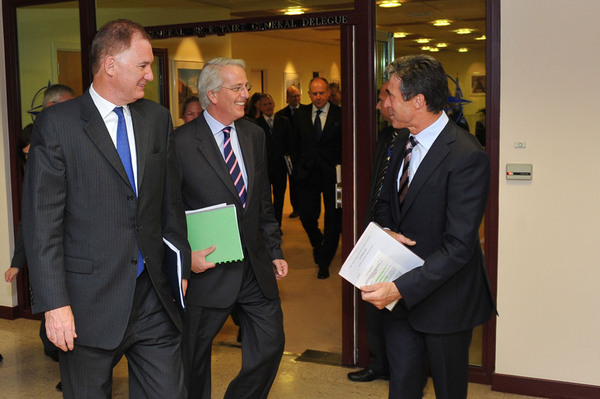 From AFP:  NATO must build a "cyber shield" to protect the transatlantic alliance from any Internet threats to its military and economic infrastructures, a top US defence official said Wednesday.

Cyber security is a "critical element" for the 28-nation alliance to embrace at its summit of leaders in Lisbon on November 19-20, US Deputy Defence Secretary William Lynn said in Brussels.

"The alliance has a crucial role to play in extending a blanket of security over our networks," Lynn said.

"NATO has a nuclear shield, it is building a stronger and stronger defence shield, it needs a cyber shield as well," he said at a forum hosted by the Security & Defence Agenda think-tank. …

"The Cold War concepts of shared warning apply in the 21st century to cyber security. Just as our air defences, our missile defences have been linked so too do our cyber defences need to be linked as well," Lynn said.

The US government estimates that more than 100 foreign intelligence agencies or governments try to hack into US systems "on a daily basis," he said, highlighting the magnitude of the challenge.

"NATO indeed needs to take decisive action to defend its networks," he said. …

"I think at Lisbon we will see the kind of high-level leadership commitment to cyber defence. It’s the foundation for any alliance effort," he said.

Lynn said he discussed cyber security at a meeting with NATO’s decision-making body, the North Atlantic Council, in Brussels on Wednesday.  (photo: NATO)