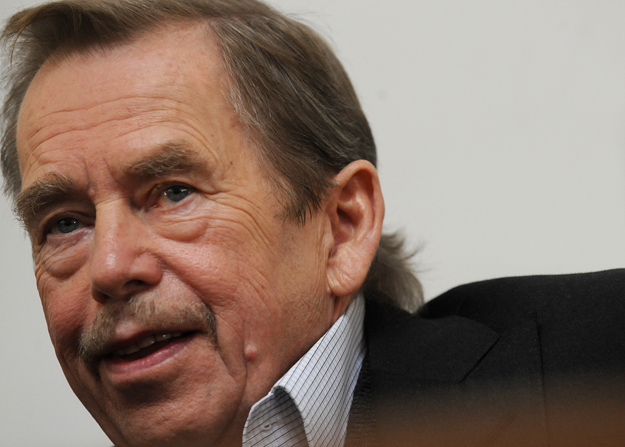 From Vaclav Havel, Project Syndicate:  It is my profound conviction that the world requires – today more than ever – enlightened, thoughtful politicians who are bold and broad-minded enough to consider things that lie beyond the scope of their immediate influence in both space and time. We need politicians willing and able to rise above their own power interests, or the particular interests of their parties or states, and act in accordance with the fundamental interests of humanity today – that is, to behave the way everyone should behave, even though most may fail to do so. . . .

I am convinced that the purpose of politics does not consist in fulfilling short-term wishes. A politician should also seek to win people over to his own ideas, even when unpopular. Politics must entail convincing voters that the politician recognizes or comprehends some things better than they do, and that it is for this reason that they should vote for him. People can thus delegate to a politician certain issues that – for a variety of reasons – they do not sense themselves, or do not want to worry about, but which someone has to address on their behalf.

Of course, all seducers of the masses, potential tyrants, or fanatics, have used this argument to make their case; the communists did the same when they declared themselves the most enlightened segment of the population, and, by virtue of this alleged enlightenment, arrogated to themselves the right to rule arbitrarily.

The true art of politics is the art of winning people’s support for a good cause, even when the pursuit of that cause may interfere with their particular momentary interests. This should happen without impeding any of the many ways in which we can check that the objective is a good cause, thereby ensuring that trusting citizens are not led to serve a lie and suffer disaster as a consequence, in an illusory search for future prosperity.

It must be said that there are intellectuals who possess a very special ability for committing this evil. They elevate their intellect above everyone else’s, and themselves above all human beings. They tell their fellow citizens that if they do not understand the brilliance of the intellectual project offered to them, it is because they are of dull mind, and have not yet risen to the heights inhabited by the project’s proponents. After all that we have gone through in the twentieth century, it is not very difficult to recognize how dangerous this intellectual – or, rather, quasi-intellectual – attitude can be. Let us remember how many intellectuals helped to create the various modern dictatorships!

A good politician should be able to explain without seeking to seduce; he should humbly look for the truth of this world without claiming to be its professional owner; and he should alert people to the good qualities in themselves, including a sense of the values and interests that transcend the personal, without taking on an air of superiority and imposing anything on his fellow humans. He should not yield to the dictate of public moods or of the mass media, while never hindering constant scrutiny of his actions.

Václav Havel was President of the Czech Republic (1993-2003), the last President of Czechoslovakia (1989-1993), and the author of 21 plays, including Largo Desolato and The Garden Party, and the essays The Power of the Powerless, Living in Truth, and The Art of the Impossible.  (photo: Michal Cizek/AFP/Getty)  (via Real Clear World)