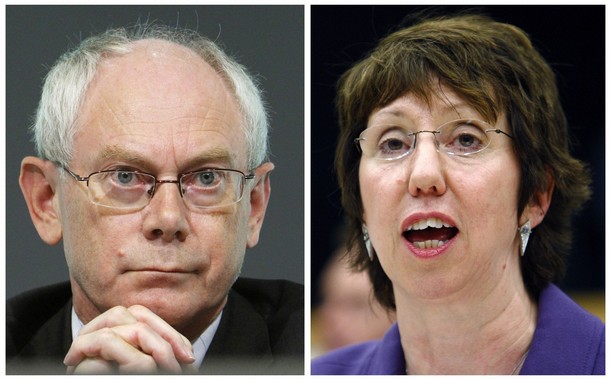 From Bruno Waterfield, the Telegraph:  Mr. [Herman] Van Rompuy, the President of the European Council which brings together EU leaders, has been accused of supporting a French proposal to set up a "special task force" on strategic relations that would rival Lady Ashton, who is supposed to be in charge of Europe’s foreign policy.

"He tried to overreach himself by getting Ashton and member states to report to him on their strategic relationships with China, India, Russia and the US. Meanwhile preparations for Thursday have not been up to standard," said an official. …

Other sources have tried to blame Lady Ashton and meetings of foreign ministers, chaired by her, for the shambles. “Foreign ministers were meeting last weekend, their contribution has been smaller than expected and the taskforce was originally a French proposal and was not suppoeted by Van Rompuy” said another official.

Brussels officials see the latest in-fighting as part of an ongoing struggle between Mr van Rompuy, Lady Ashton and José Manuel Barroso over who is in charge of the EU after the controversial Lisbon Treaty entered into force last December.

The EU president’s is said to be angry that national governments have rebuffed proposals giving him a powerful role in European "economic governance" and that Mr Barroso, not he, was asked to give a high profile "state of the union" speech to MEPs last week.

"He is really sore that the president of Europe was totally absent at the state of the union speech and that Barroso is making the economic proposals," said an EU source.  (photo: Reuters) (via Global Europe)