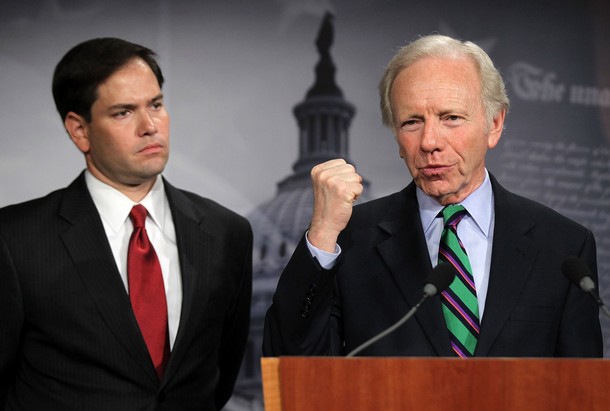 From Joe Lieberman and Marco Rubio, the Wall Street Journal:  The deepening confrontation between the White House and Congress over Libya is both counterproductive and unnecessary. Whatever one thinks about the constitutional questions surrounding the War Powers Resolution, or the wisdom of the original decision to intervene in Libya three months ago, the strategic reality is that our nation is now engaged in a fight. It will either end in the demise of a brutal anti-American dictator, or in his victory over us and our allies. The latter would be an extremely harmful outcome for the U.S.

For this reason, we have an unequivocal national interest in ensuring Moammar Gadhafi’s regime is defeated as quickly as possible. To guarantee the mission’s success, it is vital that the U.S. officially recognize the Transitional National Council, provide additional resources to support the council, and intensify strike operations to target the Gadhafi regime. . . .

If the U.S. were to withdraw from operations against the regime in Tripoli, the coalition would quickly unravel. Gadhafi would emerge triumphant, even more dangerous and determined to seek his revenge through terrorism against the countries in NATO and the Arab League that tried and failed to overthrow him. U.S. withdrawal would also mean a bloodbath inside Libya, as Gadhafi unleashes unspeakable horrors against the Libyan people who sought their freedom. And it would have ripple effects across the Middle East: Pro-democracy movements from Iran to Syria would conclude that the U.S. had abandoned them, and dictators would be emboldened.

American disengagement would also inflict irreparable damage on the NATO alliance, a pillar of U.S. security in which we have a vital national interest. Having walked out on our European allies in the middle of a battle, we can expect them to do the same to us in Afghanistan. . . .

For those on Capitol Hill who think the president requires congressional authorization to continue operations in Libya, there is a simple solution: Congress can and should pass a resolution explicitly backing these activities. It is precisely for this reason that we support a Senate resolution, put forward by Sen. John McCain (R., Ariz.), to do this.

Mr. Lieberman is an Independent Democratic senator from Connecticut. Mr. Rubio is a Republican senator from Florida.  (photo: Getty)