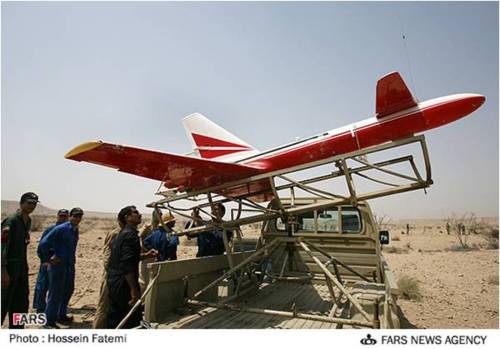 Syrian rebels show off three smallish, unarmed surveillance drones they say they downed. Walking a viewer through what looks like a machinist shop displaying their banner, the Syrians display two robotic planes built around a missile-shaped fuselage, appearing to be around six feet in length, painted red and yellow; and a far smaller red plane. All three show signs of damage, with the tiny drone’s nose cone looking to have taken the worst, and alongside the drones are pamphlets displaying the face of the dead Iranian ayatollah Ruhollah Khomeini. It’s yet more evidence that Iran considers Syria’s civil war to be a proxy contest with much at stake for their influence in the region.

The two larger drones appear to be variants of Iran’s homemade Ababil, or Swallow, surveillance aircraft. . . .

This isn’t the first apparently-Iranian drone to pop up in Syria. Satellite photography revealed that the unarmed Iranian-made Mohajer 4 spy drone has been circling overhead rebel positions since February. (Ironically, the U.S. Air Force has sent its own unarmed surveillance over Syria to gather intel.)   (photo: Hossein Fatemi/FARS)