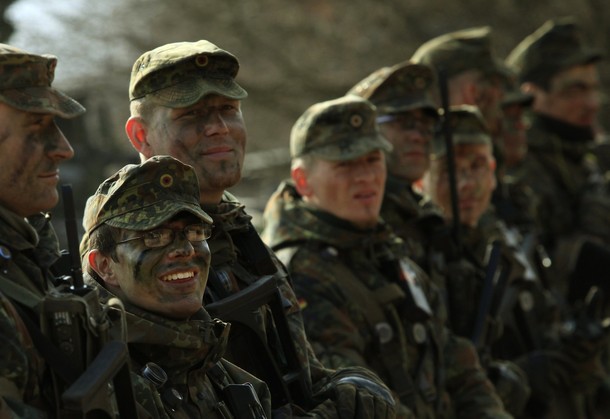 From Alice Baghdjian, Reuters:  Voluntary military service has exceeded expectations in Germany, which continues to struggle to define its international and military role in the historical wake of past aggression.

Since its introduction in July 2011, around 9,000 Germans are estimated to have volunteered in the scheme – almost double what the government had estimated.

At the Hans-Joachim von Zieten barracks in Beelitz, a run-down east German town whose asparagus harvest is hailed as the highlight of the municipal calendar, all 140 places for volunteers have been filled every quarter.

Fears that scrapping the decades-old draft for male school leavers would leave the army desperately understaffed have proved unfounded, said Lt. Col. Boris Nannt, commander of Beelitz and the logistics battalion based there.

Despite a shaky start – the national drop-out rate was 24 percent in the first six months – Nannt said he had not experienced any recruitment problems.

"I think it’s fair that if people come to the army voluntarily they should be able to leave. But the people who stay – the larger percentage – are tip-top," he said.

"The big difference is that they want to be here and that’s more important to me as a commander," he said. . . .

Under the last version of the draft, first introduced in West Germany in 1957, young men had faced compulsory service of six months. Now, as then, recruits who decide to extend their period of service to 18 months or more open themselves up to the possibility of serving in war zones.

With over 5,000 soldiers in Afghanistan, Germany is the third largest contributor of troops to the NATO-led force there, and has suffered 52 deaths since 2001.

Beelitz will send 300 soldiers to Afghanistan in October – the third time the battalion has deployed troops to the country.

Hassan Ahmad El-Hassan, 20, rings his mum every Thursday to ask what she will be cooking when he comes home at weekends.

As a Muslim, El-Hassan cannot eat the meat served in the mess, but he said this was a minor inconvenience.

Not only is he planning to extend his stay in the army, he would also be willing to serve in Afghanistan.

"They (the Taliban) are dragging my religion through the mud. That’s why there’s no question that I’d go out there because freedom should be the same for everybody," he said.

El-Hassan, who was born in Berlin to Lebanese parents, said his decision to sign up stemmed from his gratitude to the country that had helped his family.

"Before, I thought I would go away for a year after school, travel around and go to America or Australia," he said.

"But this country took my parents in when they fled Lebanon and gave us the chance to lead a normal life, and I really wanted to give something back," he said.  (photo: Reuters)