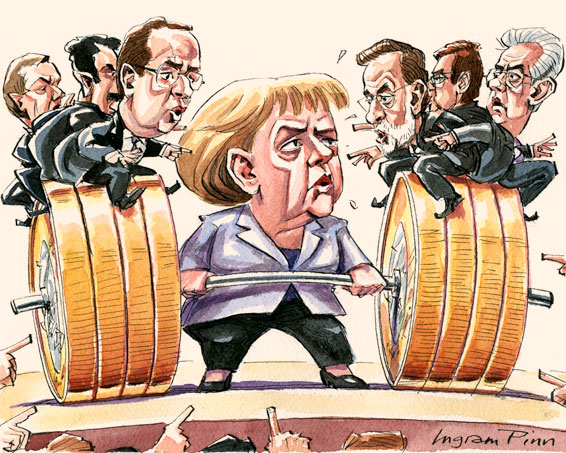 From Gideon Rachman, the Financial Times:  Of course, nobody questions modern Germany’s democratic credentials. Only in the wilder fringes of the Greek press has Chancellor Angela Merkel been compared to Adolf Hitler. But the picture that emerges from the world’s press is of a stubborn Germany, whose actions threaten the world. This weekend’s Economist magazine cover showed the global economy as a sinking ship and beseeches Ms Merkel to “start the engines”.

The magazine summarises an international “consensus on what Ms Merkel must do”, including “shifting from austerity”, “a banking union with euro-wide deposit insurance” and a “limited form of debt mutualisation”. Privately, world leaders from London to Washington and Rome are urging similar actions on Berlin. . . .

Consider just one of the proposals on the shopping list: a Europe-wide bank deposit insurance scheme. As a senior Dutch politician who shares the German view, puts it: “We cannot push through a banking union when the French have just cut their retirement age to 60 and we have raised ours to 67.” From the Dutch and German point of view, it is unfair for their citizens to underwrite the banks of countries using their own money to pay social benefits that are more generous than those on offer in Germany or the Netherlands. . . .

While Ms Merkel’s handling of the crisis has not been faultless (whose has?), she has one huge achievement to her name. She has prevented the political extremes from gaining a foothold in the country.

Anybody who thinks that is a phantom danger should take a look at Germany’s neighbours. In France, a third of the electorate recently voted for a far-right or a far-left candidate for the presidency. In the Netherlands – like Germany, a creditor nation that is sick of bailing out southern Europe – the far right and the far left are running first and second in the opinion polls. In Austria, the far right are at nearly 30 per cent in the polls.

Germany has all the conditions for a similar backlash. The country’s voters have every reason to feel misled about the euro. They were once promised that the single currency involved a no-bailout clause that would prevent German taxpayers from having to support other eurozone countries. But Germany has already had to accept potential liabilities of €280bn to fund Europe’s various bailouts – and there will be further demands to come. Simply funding Germany’s capital contribution to the European Stability Mechanism will increase the country’s budget deficit this year from €26bn to €35bn.

And yet despite the burdens and risks that Germany has already taken on, the country’s government finds itself abused for not doing even more. Isolating and berating Berlin, while trying to force the country to underwrite the finances of the whole of the eurozone, is a politically dangerous course. The rise of far-right nationalists in Greece or the Netherlands is deeply regrettable. The rise of the far right in Germany would be a disaster.  (graphic: Ingram Pinn/Financial Times)