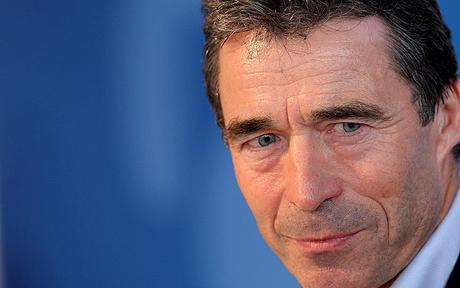 From Nick Meo, the Telegraph:  Anders Fogh Rasmussen told The Sunday Telegraph he has full American backing for a proposed €200 million (£165 million) defensive "shield", which he hopes will be agreed in November at a summit of members in Lisbon.

He was speaking after weapons inspectors from the International Atomic Energy Agency (IAEA) warned last week that Iran had passed a crucial nuclear threshold which took it nearer to being able to arm ballistic missiles with nuclear warheads.

"Based on their public statements we know that Iran already has missiles with a range sufficient to hit targets in Europe, and they don’t hide the fact that they want to further develop their capability," Mr Rasmussen said.

"If Iran eventually acquires a nuclear capability that will be very dangerous, and a direct threat to the allies. That is the reason why I am now proposing a new and effective Nato missile defence system. …"

"In a nutshell we could build an effective missile defence system to protect all our population by connecting existing systems," he said. "Even in a time of economic constraints it would cost very little – €200 million over 10 years, shared between 28 allies. For a modest cost we can protect 900 million citizens."

"If Nato decides to go ahead and develop a missile defence system it should be accompanied by an invitation to the Russians to cooperate. This would make sense from a security point of view. Realistically we would have a Nato system alongside a Russian system. We can develop cooperation mechanisms which would make the whole system more effective."

"No decisions have been taken yet. We will have consultation with Russia. We need effective protection against a real threat." Supporters of the plan believe it could fundamentally alter the troubled relationship between Nato and Russia, ushering in a new era of cooperation.  (photo: EPA)