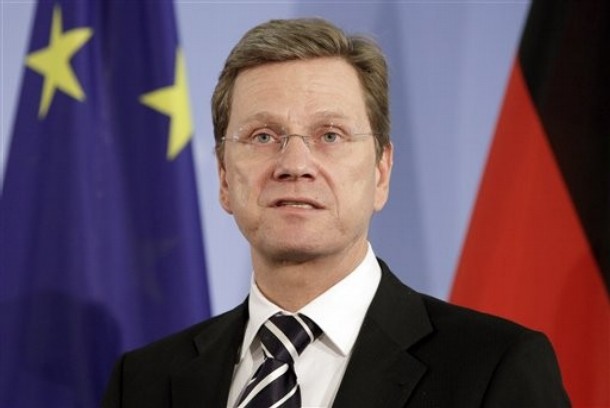 From Reuters:  The centre-left daily Sueddeutsche Zeitung made one of the strongest attacks on [German Foreign Minister Guido] Westerwelle and Chancellor Angela Merkel for deciding to take no part in any military effort to protect Libyan civilians from leader Muammar Gaddafi’s forces. "For the first time since its inception, the Federal Republic has pulled up the anchor that secures it to the West," wrote commentator Daniel Broessler.

Broessler equated the abstention with a direct vote against Germany’s NATO allies on the United Nations Security Council which supported the resolution.

"Now Merkel and Westerwelle are responsible for Germany voting against Americans, British and French, but with the Chinese, Russians, Brazilians and Indians — against our most important allies in the West and on the side of dictators, autocrats and two distant democracies."

Since World War Two, Germans have been traditionally hostile to foreign military interventions and Merkel’s coalition faces a series of difficult regional elections this weekend and next. …

Wolfgang Ischinger, an international lawyer who chairs the Munich Security Conference, said Germany could have voted for the U.N. resolution while making clear that it did not envisage getting involved in any military action.

Gernot Erler, deputy leader of the Social Democrats in parliament, accused Westerwelle of being under the false impression that supporting a no-fly zone automatically meant deploying German troops.  (photo: AP)