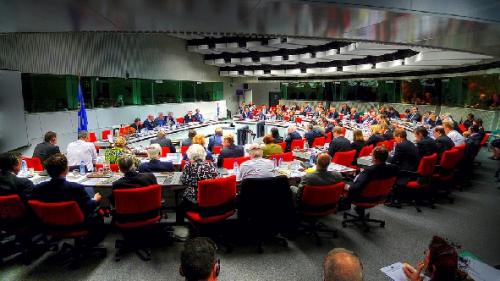 From the AFP: The Cold War-era Western European Union defence alliance, set up in the wake of World War II, is to cease functioning, its assembly’s head Robert Walter said on Wednesday.

"The WEU as an organisation will be wound down within a year or so," said British parliamentarian Walter, who presides over the Paris-based assembly of the international grouping.

Walters said an announcement would be made "in the coming days" on ending the WEU, which is no longer seen as having a useful role in the present-day world.

According to a diplomat, British Foreign Secretary David Miliband wrote this month to the WEU’s British delegation informing it of Britain’s intention to renounce the body’s founding treaty within the coming days.
Many countries hope for a more collective announcement, the source said.

Including associate and observer nations, the WEU is made up of 28 countries including most of the EU members along with Turkey, Iceland and Norway.

It currently has a budget of 13 million euros (17 million dollars) and a staff of 60.  (photo: Assembly of the WEU)