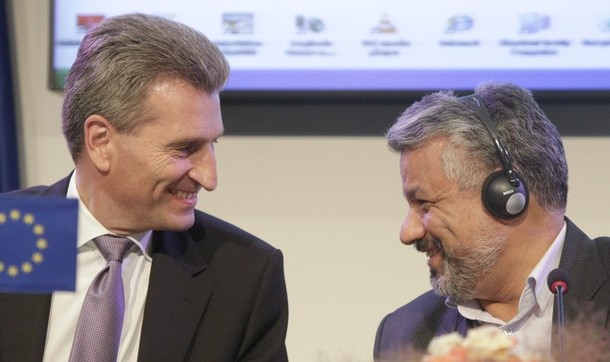 From Benjamin Weinthal, the New Republic:  As the world witnesses the Syrian and Iranian regimes commit countless human rights abuses and, in Iran’s case, move ever closer to perfecting its nuclear capabilities, there’s a common belief that, short of military intervention, there’s nothing that can be done. As it turns out, however, that’s far from the truth —but the majority of the initiative must come from Europe. The European Union has thus far failed to confront the Iranian and Syrian regimes to the full extent of its ability. Though they are loath to admit it, European countries are Iran’s and Syria’s best customers, providing the EU with significant leverage. Meaningful energy sanctions could deliver a one-two punch to Iran’s nuclear weapons program and Syrian president Bashar Al Assad’s ongoing campaign to snuff out his country’s democratic reformers.

To its credit, the EU imposed oil sanctions on the Syrian regime in September, barring its 27 members from purchasing Syrian oil. Given that the EU consumes 95 percent of Syria’s oil exports, the embargo could potentially cripple the country’s economy. But there are loopholes in the EU sanctions that allow European energy firms to maintain their investments in Syrian oil fields, continue producing oil from them, and continue delivering it to their EU customers until mid-November. As a result, major European energy companies continue to operate there, including the United Kingdom’s Gulfsands Petreoleum and Petrofac, Hungary’s MOL, France’s Total, Croatia’s INA Industrija Nafte d.d, and the joint Dutch-British enterprise Royal Dutch Shell. . . .

And when it comes to Iran, the EU remains the country’s most important global trade partner. Just last year, the total trade volume between the EU and Iran exceeded €25 billion. Almost 90 percent of Europe’s imports from Iran are energy, making the Islamic Republic the sixth-largest energy provider to the EU. While U.S. companies are prohibited from purchasing Iranian gas, and the Obama administration pushed the EU to ban the export of energy technology to Iran, Europe continues to buy Iranian gas. . . .

If the EU decided to reduce its Iranian gas imports, the measures could jolt Iran’s fragile energy market, prompting secondary pain to the cash-strapped Syrian regime that Iran is aiding. Iran’s highly vulnerable energy sector has long been considered its Achilles’ heel. The country finances its nuclear program with invaluable revenue from its energy sector. A staggering 70 percent of Iran’s governmental revenues derive from its petroleum business, which makes up 80 percent of the country’s export activities. . . .

Benjamin Weinthal is a Berlin-based investigative journalist and fellow at the Foundation for Defense of Democracies.  (photo: Reuters)