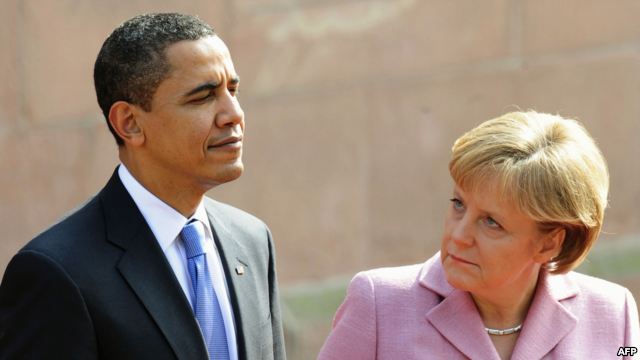 From Severin Weiland, Spiegel:  So what does Obama’s re-election actually mean for Germany? Will the president set a new tone in German-American relations in the coming four years? From the German government’s perspective, the top priority — not least because of its effects on the global economy — is the United States’ high national deficit. Chancellor Merkel and her strategists have expectations for Obama to finally consolidate his country’s budget. "The time of policies financed by debt has come to an end, and the US knows this," says Foreign Minister Guido Westerwelle of the Free Democratic Party (FDP). "Obama needs to demonstrate that he can get the deficit under control," stresses Philipp Missfelder, the foreign policy spokesperson in the federal parliament, the Bundestag, for Merkel’s Christian Democratic Union (CDU). . . .

Obama’s re-election should make planning on one important point easier for the NATO states, and thus for Germany: the future of NATO’s engagement in the Hindu Kush. President Obama’s goal remains the withdrawal of American forces from Afghanistan by 2014. Other nations with troops in Afghanistan, including Germany, have oriented their plans around this goal. During the election campaign, Romney sowed doubt about the plan for withdrawal, leaving politicians in all the NATO states wondering what would come next.

International cooperation with Obama, though, has its own potential problem areas. The president’s focus on the Asia-Pacific region in recent years has made clear to his European partners that the old Continent no longer ranks first in the American president’s eyes.

Many politicians who play a role in shaping foreign policy in Berlin would like to see that change. Ruprecht Polenz, who is the chairman of the Bundestag’s Foreign Affairs Committee, proposes revitalizing previous calls to create a trans-Atlantic free-trade zone. The politician, a member of Merkel’s CDU party, believes that could help tighten ties between Europe and the United States. Five years ago, when Germany held the six-month rotating presidency of the EU, the chancellor created the Trans-Atlantic Economic Council (TEC), the aim of which is to remove or lower barriers to the free flow of goods, services and capital between the two continents. However, little has happened since then. Nor is it likely that such a free-trade agreement could take shape quickly. Amidst the economic crisis and relatively high unemployment, protectionist sentiments are growing — within both the Democratic and Republican parties.  (photo: AFP)