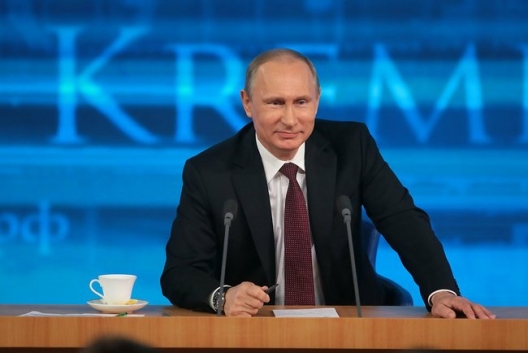 [T]he real glue holding the population to Putin’s regime isn’t rising expectations but the country’s all-encompassing corruption , starting with the daily bribes Russians must pay to traffic police, building inspectors and most other officials with discretionary power.

A small business owner once described to me how the tax police froze his company’s bank account after claiming he’d failed to file a crucial document with his tax return. When he showed up at the tax police building with the proper paper bearing the right stamp, he was still made to wait in line at an office that never seemed to open.

“I kept returning,” he said, “until someone approached me to say he sympathized. Then he suggested I visit another office down the hall, where it was understood I’d pay a bribe and my problem would disappear.” He coughed up $500, and told me routine pressure like that is effective because it paralyzes companies. “Business owners will do anything to unfreeze their bank accounts.”

Other corruption is more blatant, such as the Sochi Games, the most expensive ever at more than $50 billion. Companies connected to one man earned more than $7 billion, roughly the same as the entire budget for the 2010 Vancouver Olympics. That man happened to be Putin’s childhood friend and former judo partner.

Corruption coerces people because it enables the authorities to prosecute almost anyone. It also coopts them, however, by providing a feeling they, too, have a stake in the system. They’re getting something in return, after all—like the corner store owner who pays the local police to ensure no trouble comes to his business and feels he has one over his competition a couple blocks away.

That may help explain why more than 70 percent of respondents in a recent poll said they would refuse to protest against falling living standards or in support of their rights even as economic growth stagnates and fluctuating oil prices threaten the Kremlin’s ability to fulfill Putin’s campaign promises. . . .

But the Cold War-like maneuvers over Ukraine are more than mere puffery. Putin has helped push Russia’s southern neighbor toward the verge of civil war, which would have terrible consequences not only for Ukraine also but Russia.

That points to another facet of Putin’s rule: He makes decisions not in his country’s interest, but his own. Destabilizing Russia’s neighbors, picking fights with Washington and threatening to direct nuclear missiles at Western Europe may be dreadful for Russia’s image and prospects for integration into the international community, but at home, it shows Putin to be tough.

That’s why it’s important for the White House to stop dismissing Putin—in public at least—as simply a bored schoolkid at the back of the classroom, as President Barack Obama did again during his NBC interview before the Sochi opening ceremony. There’s too much at stake.

Gregory Feifer is editor for Europe at Global Post and author most recently of Russians, a book about Russian behavior and society.