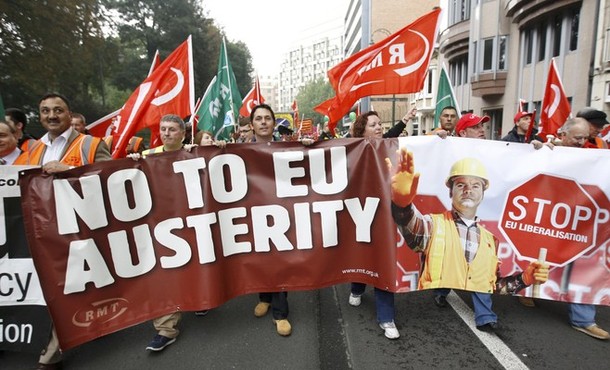 From Stephen Castle, the New York Times:  In Brussels, meanwhile, the bureaucracy that runs the European Union is haggling over how much to increase next year’s budget.

In 2011, the European Union will pour billions more euros into the Continent’s regions for infrastructure and other projects. Spending on justice and security is set to rise sharply, while even purely administrative costs are expected to increase by more than 4 percent.

Supporters see the spending as an antidote to austerity, a way to keep a fragile economic recovery alive.

Critics say it highlights the remoteness of Brussels, where pay raises are written into law, spending priorities are decided up to seven years in advance and millions are spent on questionable efforts to spread the message of a 27-nation bloc that often seems to have little decisive to say on issues that matter to voters, like immigration. …

The European Commission, the E.U. executive, is seeking a 5.9 percent increase in the bloc’s 2011 budget, lifting annual spending above €130 billion, or nearly $180 billion — about half the annual public spending of a midsize nation like the Netherlands. National governments have tried to limit spending to €126.5 billion, a 2.9 percent increase.

But the European Parliament, which must approve the budget, sought to add or restore a host of measures in a mix of altruism, special interests and pork barrel politics familiar to anyone who tracks the U.S. Congress. …

There is the new president of the European Council, Herman Van Rompuy of Belgium, and a new foreign policy chief, Catherine Ashton of Britain. There is also the European Parliament, which got an additional €9.4 million to exercise new powers.

To run his operation, Mr. Van Rompuy got €25 million for 2010. Ms. Ashton’s new foreign service will cost €476 million in 2011, the commission says, much of it met by transferring existing staff, but with €34.5 million needed for new posts. (photo: Reuters)