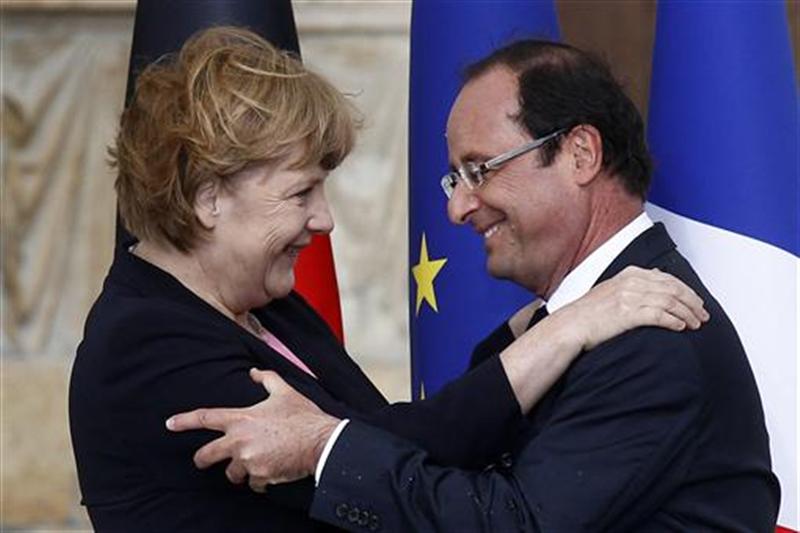 From Ulrike Guérot, World Politics Review:  Throughout the European Union’s sovereign debt crisis, the conventional wisdom has portrayed Germany as leading the EU, in particular by imposing its economic policy preferences on the eurozone. A quick glance at Greece, Italy and Spain, suffering ever more acutely from austerity measures imposed at Germany’s insistence, would seem to confirm that perception. Germans are convinced that these countries need still more of the austerity cure, while Athens, Rome and Madrid are trying to convince Berlin that the medicine is just as fatal as the disease. . . .

In reality, Germany is already pretty isolated, and a new European coalition bent on pushing back against the “Berlin Consensus” seems to be forming. . . .

The events at the last EU Summit in June, when newly elected French President François Hollande choreographed a sort of Southern European alliance with Spanish Prime Minister Mariano Rajoy and Italian Prime Minister Mario Monti, signaled a dilution of the bedrock principle of Franco-German relations, which held that if the two sides’ positions on a policy issue significantly diverged, they would find a compromise to pave the way for a European consensus. The reason for the change has to do with a structural shift that has disrupted the historical symmetry between the political giant France and the economic giant Germany. Today, not only has the economic gap between France and Germany widened, to France’s detriment, but Germany is also gaining political power and authority, when it comes to dealing with Russia and China for instance. Germany is becoming a global player on its own, and the new asymmetry has upended the Franco-German equation for Europe: France is now too weak to confront Germany alone, and Germany is too strong to accept compromise with France in the way it always did.

France still has some arrows in its quiver, however. The history and structure of the Franco-German relationship, as well as the exposure of Germany’s exporters and banking sector to the crisis-hit eurozone countries, give France leverage, especially if Paris is backed up by the rest of the European South. That is why the question of who is actually leading the EU is so complex, and why the answer is not so clear cut.

Though Germany has imposed austerity on the European South, it has ceded a good deal of ground with respect to its orthodox monetary policy convictions. Since early September, it has accepted a de facto “political interest rate” and monetization of sovereign debt, while giving up on the Bundesbank as a model for the European Central Bank. Now it is organizing a last tug-of-war over austerity and structural reforms before entering into the final stages of establishing a eurozone-wide banking oversight mechanism, another concession. The German mantra is to maintain the pressure for reforms before surrendering into any kind of debt mutualization, and it is likely that this will continue for another couple of months, until the conditions for more fiscal and political integration — especially the question of budgetary oversight, as ECB head Mario Draghi recently put it in a speech in Berlin — are sorted out.

Ulrike Guérot is the representative for Germany at the European Council on Foreign Relations, based in Berlin.  (photo: Reuters)