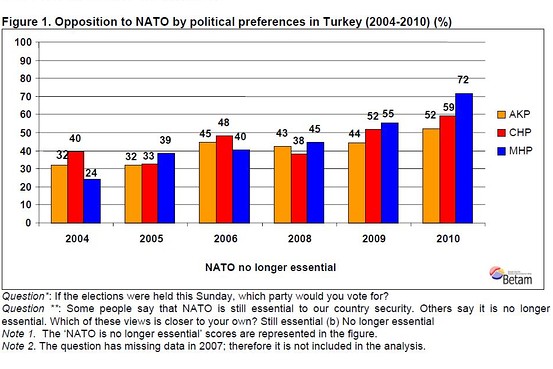 From Marc Champion, the Wall Street Journal:  In the vexed debate over whether Turkey is shifting its axis to the east, a new study suggests that if it is, then that may be more about old-fashioned nationalism than rising Islamism.

The study by the Betam research center at Istanbul’s Bahcesehir University crunches the data from seven years of a multi-national trends survey produced annually by the German Marshall Fund. The most interesting finding is that, when broken down by voting preference, the Turks who have swung the least against the North Atlantic Treaty Organization turn out to be those who vote for the country’s Islamic-leaning government led by the Justice and Development Party, or AK Party.

Asked in 2004 whether NATO membership was essential to Turkey’s security, 24% of voters for the severely nationalist Nationalist Movement Party, or MHP, said ‘No’, compared with 32% of AK Party voters. Asked the same question in 2010, 72% of MHP voters and 52% of AK Party supporters said ‘No’. . . .

The Betam report focuses on NATO. Whereas 67% of Turks said they supported NATO in 2004, last year that figure was 41%. Rubbing salt into the wound, Turks continue to rank among the countries most willing to support the use of their military to intervene abroad—including to ensure oil supplies, something Mr. Erdogan accused the Western coalition of trying to do in Libya.

Yet, according to the survey data, Turks have been among the least willing among the 12 countries surveyed to send their military to the aid of a fellow NATO member under attack – the original raison d’etre of NATO.  (graphic: BETAM)