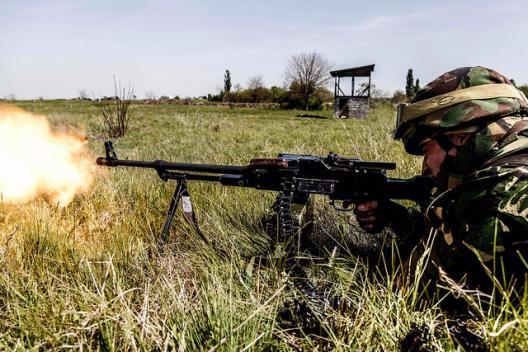 It’s just 5.56 centimeters long — about 2 inches — and only 5.7 millimeters in diameter at its business end. In its most common American variant, it weighs 12.3 grams. It can reach a muzzle velocity of over 3,000 feet per second, and it is designed to penetrate three-eighths of an inch of steel at 350 meters.

It is, of course, a bullet.

In 1980, after decades of development and negotiation, the NATO member states agreed to use this particular cartridge — and it is now one of the most common small-arms munitions in the world. The argument for such standardization is obvious: In combat, being able to share ammunition can make the difference between surviving a firefight and being overrun….

An alliance, like any collaboration, doesn’t work simply because its members agree on a course of action. It requires much more: Standardization of equipment served as a force multiplier for Western armies against the Soviet Union. But when humans succeed in striving toward a common goal, much more than mere common gear is involved: practices, processes, and a shared vision of risk and reward. This cohesion creates powerful intellectual bonds and, over time, lead to the accumulation of knowledge….

[I]nteroperability depends on a huge number of often seemingly small choices. Tanks need regular refueling, for example, but NATO allies deploy several different types of tanks. So resupply operations have to bring not just the fuel, but various filters, too, so that one tanker truck can serve every piece of armor in need. When a battery dies? To get a jump from a European tank to an American one, soldiers must use a variety of cables and adapters. Such details matter — in action, lives may depend on having the right electrical connector — and given the amount of equipment used to fight modern war, there is a lot of specific hardware that has to be identified, agreed on, and deployed. But even so, this is the easier side of what it takes to make NATO go.

The more complicated and more important task: forging a common approach to thinking and communicating across the alliance. Common material is important, but what’s vital is a common methodology, a common language. Sometimes, it’s purely vocabulary at issue. “You have to be proficient in language — in English — to have a common perspective — particularly in combat,” says Colonel Ivan Mikuz, formerly a NATO strategic planner, now the Slovenian defense attaché in Washington.

Just as essential, and more difficult to achieve, NATO over the decades has developed common habits of thought, the procedures its personnel use to work together on every level from small unit operations to strategic planning. “You have to find agreement in a structured way,” Mikuz says. “Doctrine and tactics that are commonly shared.”

None of this is to say that collaboration within NATO works perfectly. “Since 1989, the fall of the Berlin wall, NATO has atrophied,” says US Army Colonel Mark Aitken. War today moves quickly, he says, and NATO hasn’t kept up — not on the hardware, nor the human part of collaboration. Member armies use a variety of digital systems to control artillery fire, for example, and many of the systems don’t talk to each other. On the human side — different NATO members take different approaches to making sure a fire mission will hit what it’s aimed at, and nothing else. The US standard says that it should take no more than three minutes to make sure the downrange area is clear and fire a shell. In a recent multinational exercise, “the fastest we got,” the colonel says, “was just under an hour.”

That failure illustrates just how much work goes into making even long-established alliances function effectively. Arguments for preserving NATO tend to focus on the larger issues of international security. Aitken emphasizes that leaving NATO would damage US relations with Europe, risking the destabilization of the continent. One retired military officer puts it this way: “What’s the cost of walking away from the alliance? 40,000 guys. That’s what the Europeans put into Afghanistan — and that’s 40,000 Americans that didn’t have to show up.”

Behind such strategic questions, though, there’s this to consider: Should the alliance shatter, all the social infrastructure that allows people to collaborate will break with it. On the most obvious level, different nations could, for example, begin using weapons that don’t fire the NATO round. There isn’t an infinite supply of jumper cable adapters. More deeply, the human systems, all the formal and informal lines of communication NATO’s officers and enlisted forces have worked out over the decades can fall apart much more quickly than they can be remade.

Thomas Levenson is a professor of science writing at MIT and an Ideas columnist. His latest book is “The Hunt for Vulcan.”